Home science effect of vaccination? New Covid-19 cases are in the UK 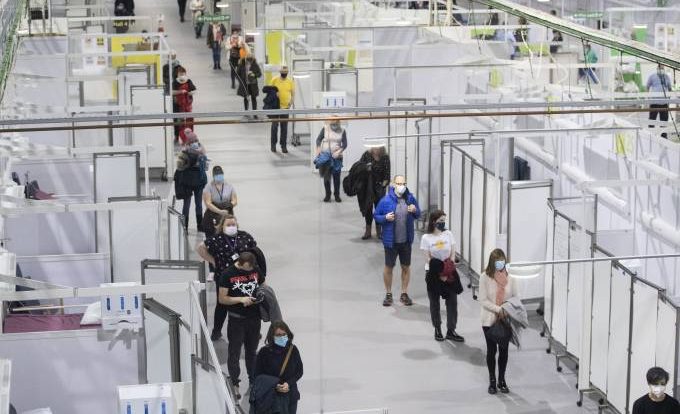 After two months of a steady increase in new Covid-19 cases in the UK, a week ago, the number of daily infections began to drop automatically and suddenly. On July 17, the peak of the new wave of infections in the country recorded 54,674 new cases. Last week, the daily rate was above 30 thousand, until records began to fall, and it reached the lowest number on Tuesday, 27, with 23,511 new cases. On Wednesday, 28, there was a slight increase – there were 27,734 new infections – but the seven-day average continued to decline.

The sudden drop in numbers is surprising because nothing has been done to control the spread of the disease. exactly the contrary. On July 19, amid already rising infections, Prime Minister Boris Johnson ended nearly all restrictive measures, including the requirement to wear masks and social distancing. The government announced on Wednesday that fully vaccinated visitors from the United States and Europe can travel to England from August 2 without the need to quarantine. The government has decided that defense against the virus is currently a “personal choice”.

Public health experts, in conjunction with the government, expected cases to increase, and possibly even skyrocket, after the measures were removed. The expectation was that, very soon, some restrictions, such as the use of masks, would have to resume. As it happened in the United States. However, contrary to all expectations, the issues are dwindling.

It is still too early to say whether, in fact, the curve of new cases in the UK has fallen again, or whether it is a one-time event. There is no consensus as to why this is happening now. According to data from Bloomberg69.9% of the UK population has received at least one dose of the vaccine. 56.3% of these people received full immunization. According to data from the Office for National Statistics, nine out of 10 people in the UK are likely to have antibodies to the new coronavirus, either because they have been in contact with the virus in the past or because they have been vaccinated. So, the sudden drop in new infections may indicate that the country has already achieved much of what it talked about – and dreamed of – herd immunity and is finally starting to control the spread of the disease.

On the other hand, local experts warn of other hypotheses to explain the unexpected trend: fewer people are taking diagnostic tests, for fear of not being able to travel; The end of the European Football Championship, the heat wave promoting outdoor activities and the beginning of school holidays.

“It is very important that we not get caught up in early conclusions about this. […] “People need to be very careful and this remains the government’s strategy,” Boris Johnson said in an interview with some reporters on Tuesday the 27th.

In Brazil, rates continue to improve and vaccination is advancing. However, experts recommend caution and reinforce the importance of maintaining preventive measures, including the use of masks and social distancing. On Thursday, 29, Brazil reached 139.1 million doses: 47.1% of the population had already been vaccinated with at least one dose, of those 19.1% had already been fully vaccinated with two doses or a Janssen injection.

See also  Is it possible and safe to combine different vaccines? Some countries of the world already apply doses from manufacturers | Nice