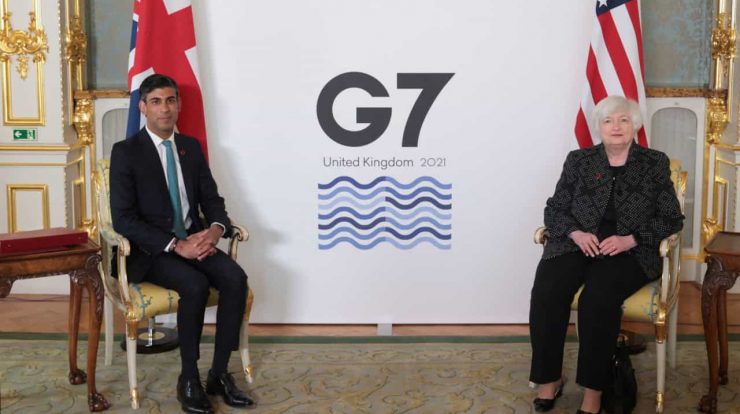 Even if the group’s finance ministers and central bank governors reach an agreement in London, it still needs to be scrutinized by the G20 and the Organization for Economic Co-operation and Development (OECD).

However, without this prior consensus, significant tax reform would be doomed to fail.

Government sources said that the United Kingdom, which is hosting the ministerial meeting that will bring together next week the leaders of the Group of Seven in Cornwall (southwest of England), is “optimistic” about the possibility of reaching an agreement.

Boris Johnson’s government considers that the final understanding is subject to at least “progress”, on Friday and Saturday, between the British, French, Italian, German, Canadian, American and Japanese ministers, as well as the European Union.

Like other members of the group, London believes the agreement should be based on two pillars: a minimum corporate tax rate and a rate that applies to large multinationals – especially technology companies – that do business in the world, but almost only contribute in countries where they have a tax home.

They insist that one without the other is not viable.

The will of the new President of the United States, Joe Biden, was decisive in reviving a project that had begun to fade.

There is talk in talks of a 15% rate of minimum corporate tax, far from the 21% proposed by France, but countries with lower tax pressure, such as the Netherlands or the Republic of Ireland, are still difficult to accept.

The beginning of the meeting on Friday will be devoted specifically to this topic. For the following sessions, there are others, such as companies’ obligation to disclose the climate impact of their activities or the need for post-pandemic recovery to be uniform across countries.

While Washington’s tone has changed since Donald Trump’s previous presidency, everyone knows that negotiations will not be easy.

For the United States, reaching agreement on a minimum tax rate for multinational corporations is particularly important, as Biden plans to raise it from 21% to 28% in the US to fund public spending programs.

He is expected to have the support of the hosts, in a similar situation, and from France, which for years has positioned itself as an advocate for the initiative, according to news agency Efe.

Today, the French Minister of Economy and Finance, Bruno Le Maire, announced that his country “has spared no effort so that the digital giants, the big winners in this crisis, pay their fair share of taxes.”

It is, according to Le Maire, a “decisive step” before the G-20 meeting, which brings together representatives from developed and developing countries, such as South Africa, Saudi Arabia, Argentina, Australia, Brazil, China, South Korea, India, Indonesia. Or Mexico or Turkey in July.

This is the first face-to-face meeting between economic policy makers from the seven most advanced democracies since they met two years ago in France.