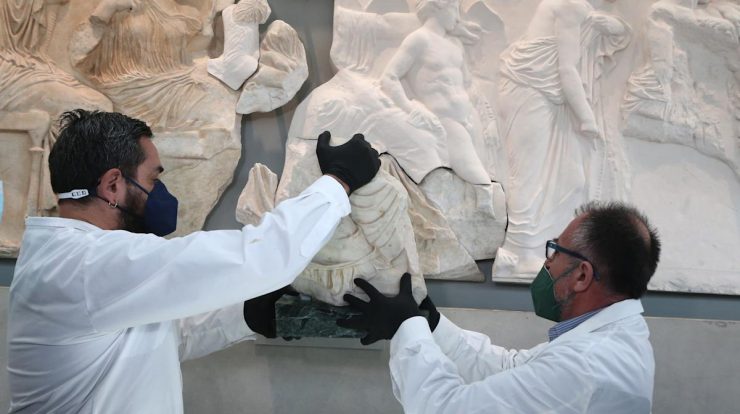 As part of the Parthenon era of one of the world’s most famous Greek postcards, the “piece of Fagan” finally returned to his home, traveling from Italy to Greece this Monday (10).

The piece will be on display in the Parthenon Gallery, the Acropolis Museum in Athens, in a glass room displaying 160-meter sculptures as they were in their original days.

Until then the piece was in the Antonio Salinas Archaeological Museum in Palermo. The repayment is temporary, the loan is for four years, and can be extended for four years.

However, the governments of the two countries have already announced that they are talking about making a permanent transfer to the piece officer.

Nicholas Stompolitis, director of the Acropolis Museum, said: “It was wonderful that Sicilian and Italian friends thought of bringing him back to his birthplace.”

“Today’s this important step paves the way for other museums to operate in a similar way,” Stompolitis told participants at the ceremony on Monday.

“Most importantly, the British Museum must understand that the time has come for the Parthenon marbles to return here to their natural home,” he argued.

Carved 2,500 years ago, this work once adorned the eastern part of the monumental abode of the Parthenon Temple, long considered a high point of traditional art.

More than half of those who escaped the 160-meter-long fries are in London. 200 years ago, Lord Elgin, who went bankrupt in 1816 to the British Museum and later became ambassador to Britain, cut sculptures from the monument for his personal collection.

Athens argues that marbles were stolen by Elgin during the Ottoman rule of Greece.

When he argued for the sculptures to be returned to the country, Johnson changed his mind, insisting that the sculptures should be legally acquired. According to him, the dispute should not be resolved between governments, but with the British Museum.

Recent polls show that the majority of British citizens support the repatriation of sculptures to Athens.

“I am particularly encouraged that the majority of Britons seem to support our demand,” Mitsotakis said.