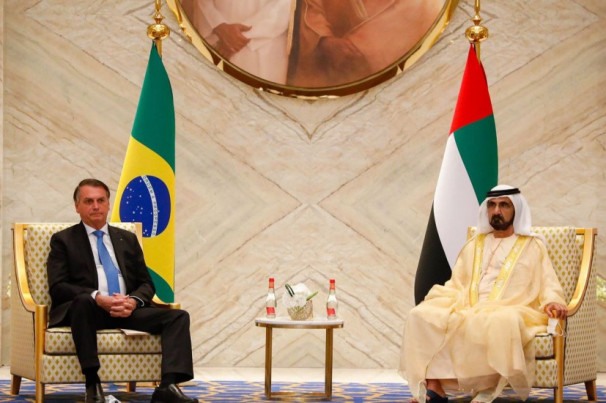 Today (13) President Jair Bolsonaro met with the Emir of Dubai, Mohammed bin Rashid Al Maktoum, who is also the Prime Minister of the United Arab Emirates.

The meeting took place after the Expo 2020 visit and immediately after the President’s disembarkation in Dubai at approximately 7:00 am (Brasilia time). Bolsonaro posted a video of the meeting on his Facebook account.

According to Deputy Eduardo Bolsonaro (PSL-SP), the president’s son accompanying him on the trip, the prince received from Bolsonaro the National Order of Cruzeiro do Sul, which, according to Itamaraty, is the highest Brazilian honor awarded to foreigners. citizens.

Last year, UK courts convicted the honorable man of kidnapping his daughters, who had fled Dubai alleging assault by their father. He also allegedly stalked his ex-wife, Princess Haya Bint Al Hussein of Jordan, and threatened her through armed security.

According to information from the human rights NGO Human Rights Watch, the girls are being held and are still being mistreated in Dubai.

According to the official agenda, Bolsonaro should participate tomorrow (14) in a seminar with investors and visit the pavilion of the Brazilian Aeronautics Company (Embraer) at the Dubai Airshow, an event in the aviation sector, in addition to returning to the Brazilian pavilion at Expo 2020.

The event, which began in October and lasts for six months, is considered one of the largest international exhibitions in the world, in the presence of official delegations and representatives of companies and the third sector.

Bolsonaro will stay in Dubai until next Tuesday (16), when he will travel to Bahrain and Qatar. The presidential delegation consists of the Ministers of Economy Paulo Guedes and Foreign Affairs Carlos Franca, among other authorities. (with the Brazilian Agency)