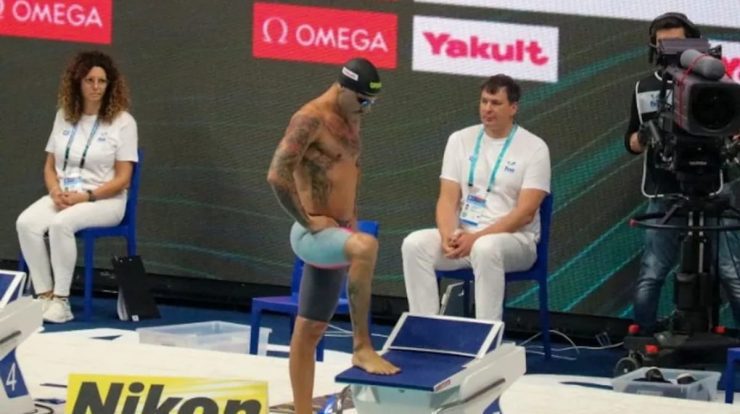 Bruno Fratos experienced a hilarious round of emotions during the 50m freestyle race at the World Aquatics Championships in Budapest, Hungary. Having set the best time in the qualifiers, he finished the semi-finals in eighth place, at the same time with French Maxime Grosset. The situation forced the two to return to the Arena Dona pool for “Tima Tema”, only against each other, and the Brazilian lost.

Bronze in the 50-meter freestyle in the Tokyo Olympics and the owner of three medals from the same event in the previous two worlds, Fratos was a hopeful medalist for Brazil, and his excellent participation in the first stage in which he finished first, with 21.71, raised expectations even more. In the semi-finals, he and Grost scored 21.83 seconds together, so they tied for eighth.

Then, the two had an emotional moment, when they fell alone in the pool, to a personal feud over the last place in the final. The highly balanced showdown ended with the Frenchman, who completed the race with a time of 21sec 59sec, beating Fratus in 21sec 62. It was the 100th time the Brazilian had reached under 22sec in the 50m freestyle.

Fratus commented: “It’s tough. It’s very different from what I expected. It ended in the 21st which everyone was talking about a bit bitterly. That’s what high-performance sports are. Sometimes you win, sometimes you lose.” “I’ve been on the podium since 2017 at Worlds, in Pan, at the Olympics, but that’s it, I’m going home, training, and next year there are worlds, then the Olympics,” he added.

In addition to the sentiment presented by Fratos, Brazil had a 4x200m relay in the final. The team made up of Fernando Scheffer, Vinicius Asuncao, Murillo Sartori and Prino Correia completed the race in 7 minutes 4 seconds 69, the new South American record, and finished fourth. The platform was formed by the United States, Australia, and the United Kingdom.

In other controversies, Vivien Jongblot finished ninth in the 800m freestyle, but went to the final after Australian Keah Melverton, who finished eighth, withdrew. Gabi Roncato competed in the same event and finished 13th, while Giovanni Diamanti finished in the 50m butterfly in 22nd. In the 100m butterfly, Mateus Gonchi and Vinicius Lanza were 18th and 25th, respectively. Luiz Gustavo Borges, competing in the 50m freestyle alongside Fratos, was 20th.

In men’s water polo, the Brazilian national team was not a match for Hungary, losing by 20 to 6. With two defeats, it became the bottom of the first group, while the Hungarians lead with four points and two victories.