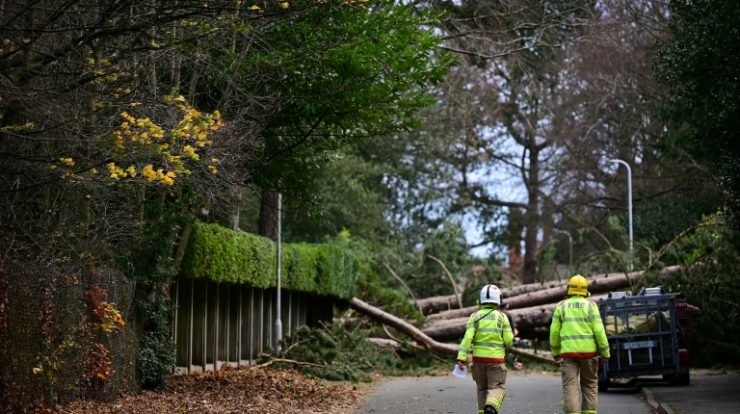 At least two people have been killed in the past few hours in the UK by Storm Irwin, which has swept through blizzards and high winds, leaving tens of thousands of people without power.

Britain’s Met Office, which put much of the country on red alert Friday night due to the winds, warned that “strong storms” could continue into Saturday.

The country is currently on an orange or yellow alert, depending on the regions, but weather services are advising people to move only when needed.

In Scotland, many train lines between Edinburgh, Glasgow and other cities were cut off due to strong winds. Several roads remained closed due to debris.

Police said Saturday that about 120 trucks were “trapped by snow” on a motorway in northern England.

Northern electricity company Powergrid estimates that strong winds have left around 55,000 customers without electricity in northern England, particularly in Northumberland.

And the meteorological services asked residents to stay away from the coast because “strong waves endanger their lives”.

+ One went vegan, the other ate meat. Check Result
+ Reincarnation in history: an ancient faith

+ The young man records the moment a woman dies without knowing that she is her mother
+ GO: A young man dies due to an electrical discharge while using the cell phone he was charging
+ Horoscope: Check today’s forecast for your horoscope
+ CNH: Find out what you need to know to apply and renew
+ Browsing crocodile video in Florianópolis has gone viral on the internet
+ Find out the most stolen cars in SP in 2021
+ Expedition identified the giant squid responsible for the shipwreck in 2011
+ Everything you need to know before buying a cooking pot
+ The US agency warns: Do not wash raw chicken meat
+ Aloe vera gel in the drink: see the benefits
+ Lemon Squeeze Trick Goes Crazy On Social Media