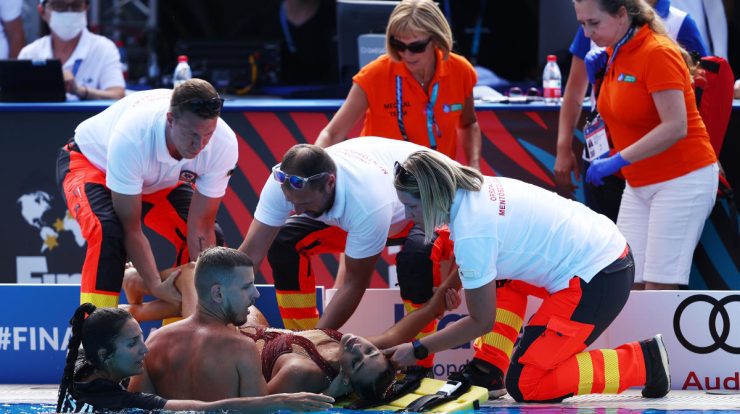 There was a lot of horror on Wednesday afternoon at the World Aquatics Championships in Budapest, Hungary. Technical swimmer, American Anita Alvarez, at the end of her show in the singles freestyle final, was exhausted and had to be rescued by the medical teams who were on standby.

Even the swimmer’s coach, Andrea Fuentes, jumped into the competition pool to prevent Anita Alvarez from drowning. The 25-year-old was taken on a stretcher and received first aid by the pool. After her health stabilized, she was sent, to the applause of the fans in the stands, to the arena’s medical center and received further care.

After her show was finished, her series was judged and got a total score of 87,6333, which allowed her to take seventh place in the contested manner. The Japanese swimmer Yukiko Inoue ranked first with 95.3667 points, and Ukrainian Marta Vidina, with a total of 93.8000 points, secured the silver medal, and the podium was completed by Greek swimmer Evangelia Platanotti, who got 91.7667 points.

The North American sports team insisted that after the awards ceremony for the individual freestyle technical event, they should report that Anita Alvarez is doing well and that she does not need to receive further care other than what was done once she was rescued from the rally.

Brazil, who was far from competing for medals on Wednesday, had an unprecedented mark with Stephanie Balduccini, who finished the 100m freestyle in 10th place, the best in Brazilian history in the world.