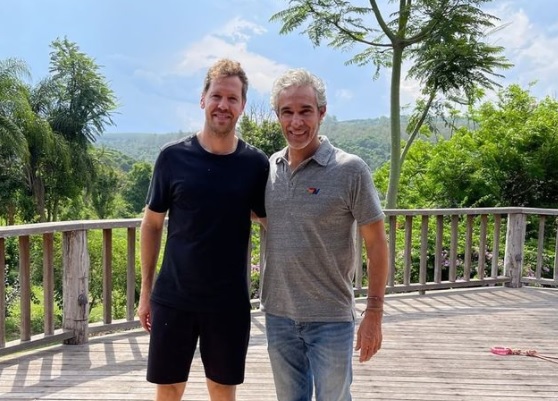 Four-time world champion Sebastian Vettel visited the farm of a former Brazilian Formula 1 driver this week. Passionate about organic and eco-agricultural production, the Aston Martins driver reunited with Pedro Paulo Deniz, who ran in the premier motorsport class between the late 1990s and early 2000s.

Despite the busy schedule, Vettel insisted on going to Etrapena, a municipality 200 kilometers from São Paulo, to better understand the process used in Fazenda da Toca, as the Pedro Diniz project is called, to produce eggs, milk and grains. organic.

“I think it’s a very exciting way to do farming. I was thrilled to get to know his farm and learn more about it, about what he went through to set up the company, about the idea, purpose and purpose of the project,” Vettel said.

“I think it is very good and innovative, and it is something the world needs. It is an honorable business to supply the world or people with food, and to do it in a responsible and renewable way. I think it is a great way to farm,” the German pilot continued.

Pedro Dínez, son of famed businessman Abilio Dínez, has made no secret of the satisfaction of being able to show his business model to one of today’s major drivers and draw on his admiration.

“It was great to share our experience with Sebastian[Vettel]and to see his interest in this agricultural model which has so much potential to regenerate plants and produce high-quality, abundant food. I wish him much success on the Formula 1 circuit and on this path of renewal,” said Pedro Diniz. It is a topic that I can see and inspire a lot.”