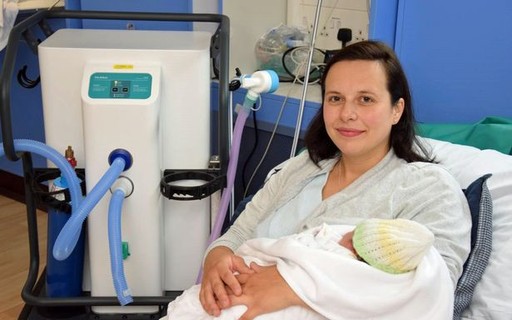 A new mother is delighted to be “making history” by becoming the first woman in the UK to give birth using eco-friendly painkillers. Gajah Gersinka used the new “fixed device” at the birth of Rosie Martha O’Sullivan on September 9 at the Birth Center in Newcastle. The device, called the Mobile Destruction Unit, “separates” the emitted nitrous oxide into nitrogen and oxygen, according to the Mirror website. That is, it is a very green alternative to ethanox, a painkiller that has been used for over a century in a mixture of nitrous oxide and oxygen. Nitrous oxide is a powerful greenhouse gas that is almost 300 times more powerful than carbon dioxide and escapes into the atmosphere after being emitted.

According to a study published in the US Journal of Obstetrics and Gynecology 2020, nitrous oxide (also known as ‘laughing gas’) is an alternative form of labor pain relief, and its use is most common for labor pain relief in countries such as Sweden, the United Kingdom, and Canada, as well as in the United States. However, in Brazil, this method is not yet known and used.

“When I got here today, I did not expect to have my baby, but I started the traditional method and then I changed. It was quieter and more comfortable. It’s good to do a little history,” the mother said after the delivery. In addition to being green, the technology developed by Medclair benefits employees by reducing the amount of nitrous oxide they emit while working.

“The introduction of this technology in our maternity ward will enable women to continue to support the use of gas and air during childbirth, which will be as environmentally friendly as possible,” said Chris Allen, a permanent anesthesiologist at the hospital in Newcastle.