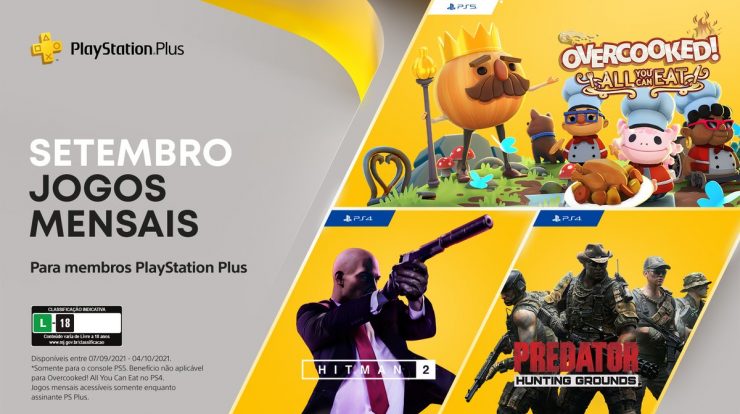 The text below was posted on the Brazilian PlayStation Blog.

Hunting, cooking and killing: choose your career with September games for PlayStation Plus members. Play as one of the greatest sci-fi icons in Predator: Hunting Grounds, and create a chaotic culinary wonder in Overcooked: All You Can Eat! Or invent unusual ways to kill in Hitman 2.

All three games will be available from Tuesday 7 September until 4 October.

Let’s get to know each title better:

Discover all that the Onion Kingdom has to offer, Overcooked! 1 and 2 with 4K graphics and more content to keep you hungry. Completely redesigned from scratch and on point. Enjoy over 200 levels (12 new levels) and over 80 chefs (2 new levels), all at 60 FPS. Players can enjoy the campaign, survival and modes for all you can eat – help! The game allows multiple players to take part in the culinary frenzy, with an adjustable user interface, accessible text for dyslexia and options available for color blindness. It’s the best version of the Overcooked experience!

Hunt or be hunted in this asymmetrical multiplayer** game that pits humans against a predator. As part of an elite squad of four, complete challenging missions before the predator finds you. Or be the Predator and hunt your prey using deadly space weapons – like the shoulder-mounted Plasma Caster, the Combistick and more – to track your prey. Discover different categories and play styles for both sides.

Travel the world and track your targets in exotic locations, from sunny streets to dangerous jungles. Nowhere is safe from the world’s most creative killer, Agent 47. Get ready for the ultimate espionage story, where your mission is to eliminate the elusive Shadow Agent and abolish his militia, but when 47 discovers the true identity of his target, and the truth about your past, everything changes. Hitman 2 introduces new ways to play, new game modes and more new features such as Sniper Assassin mode, the franchise’s first co-op mode**.

Last chance to download PlayStation Plus monthly games for August

August games are setting the stage for September news, so you have until Monday, September 6th, to get your hands on Hunter’s Arena: Legends, Plants Vs. Zombies: Battle for Neighborville and Tennis World Tour 2.

* PS5 version only. The feature does not apply to Overcooked: all you can eat! on PS4 consoles.

** Online multiplayer requires a PlayStation Plus subscription; The amount is recurring until canceled. Age restrictions apply. Full terms in: play.st/PSPlusTerms.