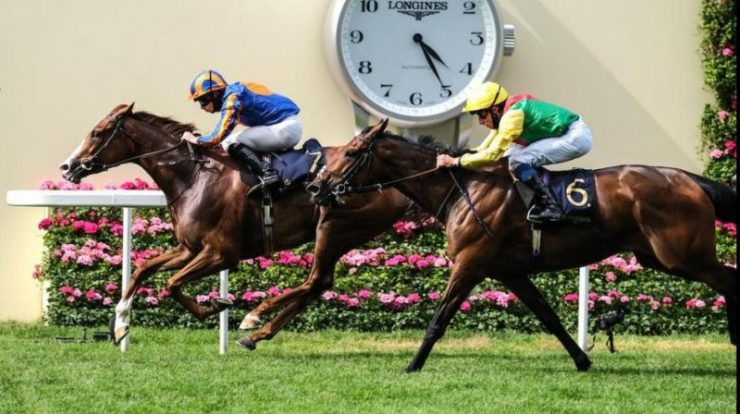 Poetic Flare added another Group One success this season with victory in the Group One St James’s Palace Stakes at Royal Ascot.

Jim Bolger’s runner blew his rivals away in the 1m contest, finishing four lengths ahead of his rival Lucky Vega who chased him home in second. This latest success puts the horse in prime position when it comes to determining who is the leading three-year-old of this generation.

It also indicates the son of Dawn Approach is good enough to take on the older horses in the 1m division later in the campaign. With Glorious Goodwood, York’s Ebor Meeting and leading races over this distance in Europe and North America, there will be a lot of options for the Royal Ascot winner.

Connections Rewarded For Their Confidence In Their Horse

In his opening start of the season, Poetic Flare won the 2000 Guineas Trial at Leopardstown. He finished just over a length ahead of Ace Aussie in that 7f contest. The horse who was just behind him that day is set to feature in the Jersey Stakes where he has Royal Ascot betting odds of 14/1. Success for the colt will boost Poetic Flare’s form even further.

A month later, Bolger’s runner added his name to the roll of honor at Newmarket with success in the 2000 Guineas. He hit the front with just over 1f to go before holding off the challenge of Master Of The Seas and Lucky Vega.

The Irish horse was given no time to rest as he made a quick reappearance in France in the Poule d’Essai des Poulains. He had to settle for sixth place on that occasion in the race which was won by St Mark’s Basilica.

The 2000 Guineas winner came close to a second Classic success in the Irish 2000 Guineas. He was involved in a battle with stablemate Mac Swiney in the closing stages of the three-year-old race at the Curragh. He crossed the finish line in second place, just a short head behind the winner.

Poetic Flare’s next assignment on the track is likely to come at Glorious Goodwood next month with a showdown with Palace Pier. The four-year-old was also victorious on day one of the royal meeting this year in the Queen Anne Stakes.

Palace Pier has established himself as the leading one miler in Europe over the last 12 months. He opened his account for the season with success in the Lockinge Stakes at Newbury.

John and Thady Gosden’s runner has now won seven of his eight races on the track. His only defeat came on British Champions Day in 2020 where he was below his best in the Queen Elizabeth II Stakes, finishing third behind The Revenant and Roseman respectively.

Before his shot at the older generation, Poetic Flare will have a deserved few weeks off as it’s been a busy couple of months for him. Connections will be excited about the challenges which lay ahead of him later in 2021.