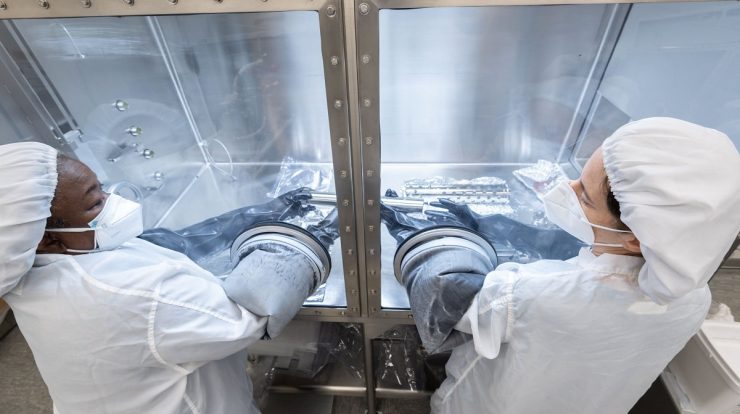 50 years ago, the Apollo missions brought the moon more than two thousand samples of rocks, and now only NASA dismantled one of the tubes that were brought in.

This is because the NASA It has already made technological advances over the years, and has kept many specimens sealed to be opened and analyzed only in the future.

According to a statement by Laurie Gleese, director of the Planetary Science Division at NASA Headquarters, NASA knew at the time that “science and technology will advance and allow scientists to study materials in new ways to address new questions in the future.”

Now, one of those tubes collected more than 50 years ago, which has been sealed in anticipation of scientific breakthroughs, has finally been opened.

Sample 73001 was collected by astronauts Eugene Cernan and Harrison Schmidt during the program’s last mission, Apollo 17, in December 1972.

The tube in question is 35 centimeters long and 4 centimeters wide, and was struck in the soil of the Toros Litro Valley on the Moon to collect rocks.

Altogether, two samples were kept airtight while on the lunar surface, and these are the first two to be opened. In addition to rock materials, the sample may contain gases or volatile matter such as water and carbon dioxide.

NASA intends to extract such gases, which should only be present in very small quantities, so it can analyze them using spectrophotometric techniques, which have become increasingly accurate over the past few years.

The sample’s outer protective tube was removed in early February, and no lunar gas was detected, indicating that the sample protecting it remained sealed. Starting on February 23, scientists began the long process of drilling the main tube and collecting the gas inside.

Then, the rock material inside the tube will be carefully extracted and crushed so that it can be studied by the most different scientific teams.

Something to note is where this particular sample was collected on the Moon: in a landslide. “We don’t have rain on the moon. So we don’t really understand how landslides happen on the moon,” said Julian Gross, Apollo deputy curator. Thus, researchers seek to study this sample to understand the cause of the landslide in question.

After tube 73001, there will be three lunar samples still sealed, but senior coordinator Ryan Ziegler doubts that NASA will wait another 50 years to open them.

“Especially once they receive samples from Artemis Going back to that, it might be a good idea to make a direct, real-time comparison of everything that’s coming from Artemis, with one of those cores still being sealed and sealed,” Ziegler explained.

Artemis is NASA’s next lunar mission, and the agency aims to return humans to the Moon in 2025.