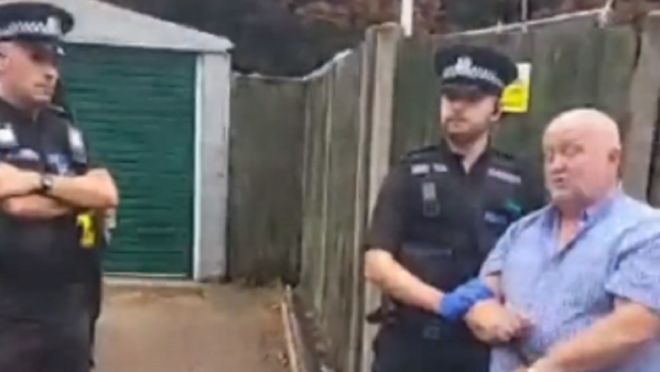 A man has been arrested in Hampshire, England, for posting swastika-shaped LGBT flags online. The video of the arrest was widely shared on social media.

“Someone has been disturbed by your post on social media. That’s why you are being arrested,” the cop said while taking the man into custody.

According to the BBC, 51-year-old Darren Brady will respond to “malicious communication”, which under British law is “the sending of letters, electronic communications, offensive or threatening articles with intent to cause distress or anxiety to the recipient” and is a “criminal offence”.

The person who took the video was also arrested. According to the police, he was detained for “resisting imprisonment”.

Hampshire Police and Crime Commissioner Donna Jones condemned the officers’ actions. “I am concerned about the proportionality and necessity of the police response to this incident,” he said. “When incidents on social media get a couple visits from the police, but thefts and break-ins don’t always get a response from the police, something is wrong,” Jones added.

American journalist and columnist for the Foundation for Economic Education, Brad Polambo, also opposed the British police action. “As John Locke explained, individuals have rights to their persons and property, including the right to use their person and property for communication. But no one has a right to any particular emotional state. Asserting this false ‘right’ to some is a violation of others’ real rights: including freedom of speech. UK “It really doesn’t matter if you think the man’s post was a joke or hateful and offensive. We all support your right to free speech and say nasty things about others. Or feel distressed without being harassed or arrested by the government,” he wrote.

“These broad and subjective criteria can be used to end any unpopular idea and suppress any debate, no matter how important. If we are not free to speak, we are not really free to think”, concluded the journalist. England is the land of great thinkers like Locke.