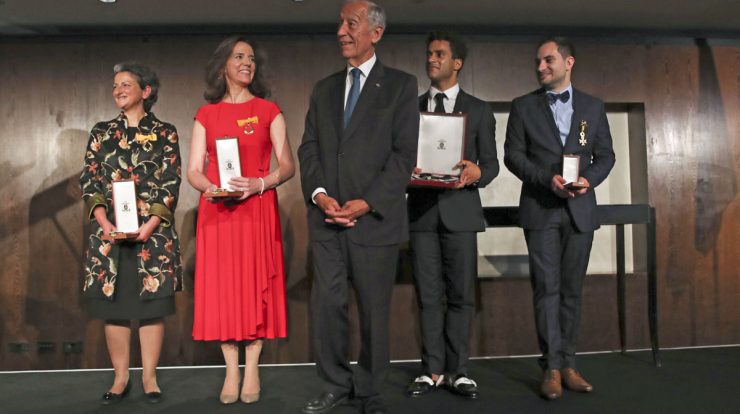 President Marcelo Rebelo de Sousa (center), honors the many Portuguese citizens living in England during a meeting with the Portuguese community residing in the UK, as part of the Commemoration of Portugal Day, Camés and Portuguese Communities, in London, 10 June. Almeida / Lusa Manuel

On June 10, the President of Portugal in London praised the dynamism of the smallest Portuguese community scattered around the world, the United Kingdom, a country he described as Portugal’s “precious ally”.

Marcelo Rebelo de Sousa participated in the reception of the Portuguese community in the United Kingdom, after the Minister of Foreign Affairs, João Gómez Cravinho, read the speech that the Prime Minister, Antonio Costa, intended to give on this occasion, had they not been prevented from traveling for health reasons.

With former Prime Minister and former President of the European Commission Durao Barroso among the attendees, the Head of State began highlighting the importance of the Portuguese community in the United Kingdom.

“After this morning, in Braga, when hundreds of thousands of Portuguese, mostly from Minho, but from all over the north, gathered to celebrate Portugal Day, it is admirable that there are now, here, in London, so many Portuguese here. From our smallest community around world,” the chief noted.

Then Marcelo Rebelo de Sousa received an extended welcome when he addressed the youngest members of the Portuguese community and said, “They are here to celebrate our country. It is a great honor to be President of the Republic of a country that has permanent ambassadors to the United Kingdom.” He added: “You are in all areas of life and regions of this great country, our ally for centuries and centuries and centuries, dear ally, this is the United Kingdom.”

Then the President of the Republic highlighted the actions in the UK for Portuguese nurses, teachers, researchers, management and economic staff – a whole new generation “connected in a network with the older generation”.

In the middle of his speech, Marcelo Rebelo de Sousa made a personal note and made the audience laugh when he spoke on one of the episodes of his family life today.

“The best future for my family is living outside Portugal, I am one of two children and all of my grandchildren. Someone even works here in London today, and he called me to say he couldn’t come,” he said.

The head of state explained what happened: “You do an internship in a box [financeiro]. They know what money is like, they take the opportunity to work in the morning, afternoon and night,” he commented.

Regarding the United Kingdom, Marcelo Rebelo de Sousa defended that Portugal had a “very strong and consistent alliance”.

According to the President of the Republic, Portugal and the United Kingdom are “both powers at sea, connected by oceans.” “In difficult moments of conflict on several continents, we depended on the British and the British. Today, we remain allies,” he noted.

In this context, the President of the Republic spoke about the current state of Portuguese-British diplomatic relations after the United Kingdom’s exit from the European Union.

“In the complex moments of international life – in addition to the fact that this alliance is a translation of being global for one another, of being European for one another, although each of us lives in a different way of being European – we have been able to stand in a short period of time, each What is necessary for British society so that it can exercise fundamental rights” in Portugal, he noted.

Regarding Portuguese residents of the United Kingdom, the Head of State advocated that, on the British side, there had always been “a willingness to recognize the rights to be exercised in this country”.

There are not many alliances that lasted six or seven centuries, consistent and solid. Alliances only last because someone, like you, builds that alliance every day. Each of you is an ambassador for Portugal. “We have the best researchers, the best students, the best staff here,” he added.

The Minister of Foreign Affairs, João Gomes Cravinho, has called on young Portuguese immigrants who are in the UK to return to Portugal. “Those who left the country for various reasons have the opportunity, if they so desire, to return home. That remains a priority for us.”

Reading the speech to be given by the head of government, Cravinho said that the executive branch has expanded measures such as the Regressar Program and IRS Jovem, to attract “young Portuguese who have completed their higher education” in “the United Kingdom and intend to return that knowledge to Portugal”.

“I hope that these celebrations will also serve to identify areas where there can be synergy between the work that has been developed here and what is being done on the national territory,” he continued.

“The success of the Portuguese across the border is also reflected in Portugal. He stressed that the success of our country also represents opportunities for our diaspora.

The Minister and the President of the Republic arrived at the event about 90 minutes late due to a problem with the flight from Portugal.

Earlier, the Portuguese Minister of State for Communities, Paulo Cavovo, noted that the ‘old alliance’ between the UK and Portugal ‘exists because there is a relationship between peoples, and between people, and this relationship is strengthened by our society’.

“The relationship wouldn’t be the same if there weren’t Portuguese people making this relationship strong and we could have a huge presence and influence in the UK,” he added.

The Portuguese Ambassador to the United Kingdom, Nuno Brito, said that the visit of the President of the Republic to London “expresses the importance that Portugal recognizes for one of the largest Portuguese diaspora communities that have contributed so much to their work” and their talents and with their love of Portugal for the development of our country and the relations between our country and the United Kingdom.

The President decorated the Portuguese community’s names, during the event, and announced in London that he would posthumously award the painter Paula Rigo the Grand Collar of the Order of Camões, an honor to be officially awarded in Lisbon.