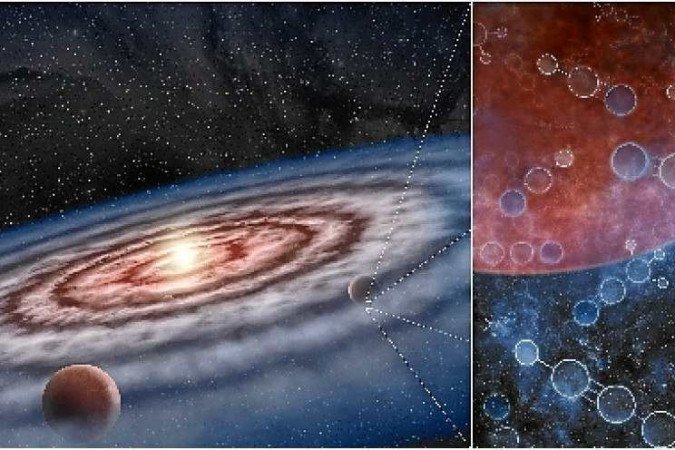 Technical impression of gas and dust in a protoplanetary disk: a region with chemical conditions that gave rise to life on Earth – (credit: M. Weiss/Center for Astrophysics/Harvard & Smithsonian/Disclosure)

An international team of astronomers has identified the formula for life on Earth in the nursery of planets, suggesting that these worlds could be habitable. Using data from the ALMA radio telescope in Chile, scientists have mapped, in unprecedented detail, the chemical elements of five protoplanetary disks — regions of dust and gas where these celestial bodies form, around young stars.

The particles in these disks affect future planets in many ways, including their “components”. For example, they can determine where and how it formed, what its chemical composition is, and whether there are organic compounds necessary for life as we know it to thrive on Earth. The Molecules with Soul on Planet Formation Scales (Maps) project focused on protoplanetary disks around young stars IM Lup, GM Aur, AS 209, HD 163296, and MWC 480—all in the Milky Way, between 300 and 500 years old. Light – because, in these places, it has already been discovered that planet formation is taking place. Comet and asteroid nurseries are also known in these areas.

ALMA has allowed scientists, for the first time, to track molecules found in the interior of protoplanetary disks, at scales of size similar to those in the Solar System. They were identified on four of five discs. “Our analysis showed that the molecules are found primarily in these interior regions, with abundances between 10 and 100 times greater than expected patterns,” says John Ely, a researcher at the University of Leeds, UK, who led the study. One of the mapping’s many findings, he says, is to suggest that the basic chemical conditions that gave rise to life on Earth could exist on a larger scale across the galaxy.

Among the substances identified by Alma, scientists note more complex organic molecules, such as HC3N, CH3CN and c-C3H2. Since they are made up of carbon, they likely serve as the raw material for larger prebiotics, the building blocks of life. Although these molecules have been previously discovered in protoplanetary disks, the maps are the first systematic study at high spatial resolution and sensitivity, and the first to find these compounds in large quantities.

“Having these large organic molecules is important because they are the starting point between the simpler carbon-based molecules, such as carbon monoxide, which are abundant in space, and the more complex, essential to creating and sustaining life.” , highlights the astronomer. The map results were published yesterday, in 20 articles, on the open access platform arXiv, and will also form a special issue of The Astrophysical Journal, containing high-resolution images acquired by ALMA.

The new maps reveal that the chemical compounds in the protoplanetary disks are not uniform in location. Instead, each nursery is a different soup of planetary formation. The results of the study indicate that the birth of planets occurs in a variety of chemical environments and that, during their formation, each of this type of celestial body can be exposed to very different particles, depending on its position in the disk.

“Our maps reveal the significance of where the planet formed in a disk,” said astronomer Karen Oberg, of the Harvard and Smithsonian Center for Astrophysics 1 (CfA) and lead author of Maps I, the first article in the series. “Many of the chemicals on the disks are organic, and their distribution varies greatly within a given disk. Two planets can form around the same star and have very different organic inventories and therefore two predispositions for life.”

Since the regions of the disk where the particles are located are also the nurseries of asteroids and comets, the scientists say it is possible that a process similar to the one that helped start life on Earth may also occur in the studied disks. The bombardment of these bodies transports large organic molecules to the newly formed planets. The main result of this work shows that the same ingredients needed to seed life on our planet are also found around other stars. It is possible that the molecules needed to start life on planets are readily available in all planetary environments,” writes Catherine Walsh, one of the project’s five leaders.

One of the next questions the researchers want to investigate is whether there are more complex molecules present in the protoplanetary disks. “Whether life exists outside Earth is one of the fundamental questions of humanity. We now know that planets are everywhere, and the next step is to determine if they have the necessary conditions for life as we know it (and how common this situation is),” says Joe Pesci, scientist Astronomy at Alma da US National Science Foundation “The mapping program will help us better answer these questions. ALMA’s search for precursors to life far from Earth complements studies conducted in laboratories and in places of extreme conditions, such as hydrothermal vents on Earth. “