Home Tech Uchuu, the most accurate and complete simulation of the universe that allows you to “travel through time” – 10/03/2021 – Science 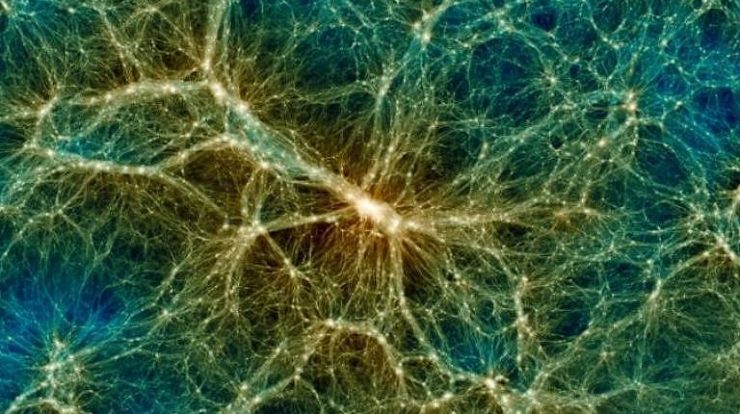 An international team of researchers has not only created an entire virtual world. They also made it available for free to everyone with an internet connection.

Uchuu, the term meaning universe in Japanese, is the most realistic simulation of the universe ever made.

The project was developed by the National Astronomical Observatory of Japan (NAOJ) in cooperation with the Astrophysical Institute of Andalusia (IAA-CSIC), the Centro de Supercomputación de Galicia (Cesga) and the Spanish academic and research network RedIRIS.

Other research groups from Japan, the United States, Argentina, Australia, Chile, France and Italy are participating in the initiative.

Simulation will allow us Studying the evolution of the universe An unprecedented level of detail and information, practically from after the Big Bang to the present.

Cosmologist Francisco Prada, a professor at the Spanish Superior Council for Scientific Research from the Andalusian Institute of Astrophysics, told BBC News Mundo.

“Using a supercomputer intensely dedicated to the project, we were able to numerically recreate all the physics involved, essentially all of Einstein’s gravitational equations and the biological and physical components of the universe, as well as all the processes involved.”

The simulation, which is already available in the Sisja cloud, will allow scientists to focus on different moments in the history of the universe and will facilitate the understanding of phenomena such as the evolution of galaxies and the formation of black holes.

The simulation was made possible by the ATERUI II supercomputer, the most powerful supercomputer dedicated exclusively to astrophysics, which belongs to the National Astronomical Observatory of Japan.

“Other large computers like the Mare Nostrum in Barcelona may have many processors,” Prada says. “But the advantage of ATERUI is that it is intended for a few projects in astrophysics.”

“And this allows you to have exclusive use for a long time to be able to do simulations like this that would otherwise be impossible. We have been fortunate to use ATERUI for a full year for 48 hours every month exclusively. It’s a huge privilege.”

Tomoaki Ishiyama, of Chiba University in Japan, was responsible for developing and implementing the code that created the simulation.

The result, said Ishiyama, “is three petabytes of data, which is equivalent to about one million photos from a 12-megapixel mobile phone.”

The simulation consists of 2.1 billion particles in a hypothetical cube that’s 9.6 billion light-years across, a dimension roughly half the distance between Earth and the most distant galaxies observed, says CSIC.

All data for analysis is stored in CESGA, a hybrid hub of CSIC and Junta de Galicia, and can also be downloaded online through the IAA server.

Uchuu will allow scientists to study in detail various moments and scenarios in the history of the universe, over a period of more than 13 billion years.

“It is as if in another simulation you can only study cars. But with our simulations, we were able to study from a surfboard to a plane or a giant tanker, and we can also see how all these objects are distributed either on a plain or in the Himalayas Or in ocean water, in environments very different from the density of matter.”

“The galaxies are distributed in the universe in what we call a large-scale structure: there are large voids, where there are very few galaxies, there are filaments, there are clusters like the Milky Way and Andromeda, and then there are large objects a thousand times larger than our Milky Way.”

Simulations allow us to see, for example, how small galaxies coalesce (merry) throughout history and form larger galaxies, a so-called hierarchical formation of the structure of the universe, Prada explains.

“This is how the Milky Way was formed. It was eating many little things and that’s part of the history of galaxy formation.”

The simulation will also allow studying the collision of two galaxies with supermassive black holes that can produce gravitational waves.

“Massive galaxies like the Milky Way have black holes. It is essential to understand the growth of these structures because it is also related to the rate at which black holes are added matter, and how they form.”

The main feature of Uchuu is that it embodies not only visible matter, but also mysterious dark matter and dark energy.

Ordinary matter, made up of atoms, accounts for less than 5% of the total energy of the universe.

Dark matter, a form of matter that does not interact with light and can only be detected through gravitational effects, accounts for about 25%. The rest, 70%, is what scientists call dark energy.

In the Uchuu show available on YoutubeFor example, if you look at dark matter and how it is distributed in a supermassive object, how big a group of galaxies can be.

“Our simulation includes all the components, all the parameters we know today in the right proportions,” Prada said.

Uchuu’s images are equivalent to “putting on special glasses” to visualize dark matter.

“There was a time in the history of the universe where gravity had to compete with dark energy because if you only had gravity, all matter would start to break down.”

“However, there comes a time in the history of the universe when this dark energy starts to take over and we don’t know what it is, but in practice we know it’s like a repulsive force, like pressure against gravity,” Prada explained to BBC News World.

See also  Free Game of the Week has been revealed

“One of the big challenges for Uchuu is that by simulating the entire structure of the universe and being able to compare all the stats we’ve observed — for example, how many large galaxy clusters we have, how many large voids are, how galaxies are clustered — we will be able to explain the nature of dark energy and better dark matter, which to this day we don’t know what it is.”

“Dark matter is understood to be an elementary particle, but we don’t know what it is. This is causing this accelerated expansion.”

Francisco Prada explains: “This image shows four moments in the history of the universe, the present below and the past above. The three columns correspond to different regions of the universe.”

“For example, the one on the right is very interesting because it shows the process of creating a large void.”

“If we go to the present, you’ll see that the density of galaxies there is very low, and there are large regions with deficits, and voids of galaxies, so we can go back in time and see how this formed.”

“In the first column you see an object similar to the Milky Way; it’s like putting glasses in the sky and seeing dark matter.”

“If I gave you instead a picture of what can only be seen with a telescope, it would be a beautiful galaxy like the Hubble images, but we see all the dark matter, because in our galaxy there must be thousands of small dark matter objects.”

“And in the middle you see a group of galaxies thousands of times larger than the objects.”

From Argentina and Chile

Scientist Sofia Alejandra Cora, of the Astrophysical Institute of La Plata in Argentina, is participating in Project Ocho.

Cora is an independent researcher at the National Council for Scientific and Technical Research (Conicet) and associate professor in the Faculty of Astronomy and Geophysical Sciences at the National University of La Plata.

“The main goal of my participation in this project is to create a catalog of galaxies from data from the Uchuu simulation, which looks only at dark matter.”

“To do this, information about the properties of dark matter halos and the way they grow and merge over time is taken as a basis,” she explained to BBC News Mundo.

He continued, “A semi-analytical model is applied to the formation and evolution of galaxies, taking into account the various physical processes that determine the properties of galaxies.”

“The semi-analytical model consists of a set of simple analytical recipes that represent different physical processes affecting the gas and stars that make up the galaxy.”

See also  The solar eclipse will form a "ring of fire" around the moon on Thursday. See how to follow | The world - the latest news from the world

“The latest version of the model used by the Argentina working group is described in an article in the Monterey Notices of the Royal Astronomical Society. This mission is in development.”

Cristian Vega Martinez, a researcher in the Department of Astronomy and the Interdisciplinary Research Institute in Science and Technology of the University of La Serena (ULS) in Chile, is also involved in the project.

“One of Uchuu’s biggest challenges was managing and publishing the large amount of data that a simulation of this class could produce.”

“Therefore, we are actively working to design technologies to process this data, provide a straightforward way to share it, and provide tools for using it.”

He has expertise in simulating galaxy formation and evolution, and knowledge of high-performance computing.

“The published data should be provided in a way that it can be useful to society,” he says.

Simulations of this kind that allow modeling of large amounts of the universe [que simulam as estruturas que definem onde as galáxias se formam], necessary to be able to compare our physical theories of the formation of galaxies and the evolution of the universe with the results of large modern experiments [telescópios]”.

For Francisco Prada, one of the main reasons Uchuu is so important is that it is freely available.

“As a scientist, I believe in the responsibility of giving access to other scientists who don’t have the possibility to do these simulations so that they can do the latest science at a high level,” he said.

“We’re making this available to everyone in the world, not just scientists, but everyone who has the Internet.”

“And in Galicia we also have the data, so people can go there and analyze the data without having to download it at home. That’s why we also provide computing power, because that computing power is usually not available to anyone.”

Data simulation, analysis and dissemination to the public were funded by public institutions in Japan and Spain.

“The cost of this project is very high and there are few groups in the world who can do this project.”

“We are in the age of big data, where what Uchuu creates is far greater than the amount of data stored by YouTube, Amazon and Google combined.”

“We’ve really been able to make the latest research freely available to the community and to scientists, and that’s what I find very encouraging.”