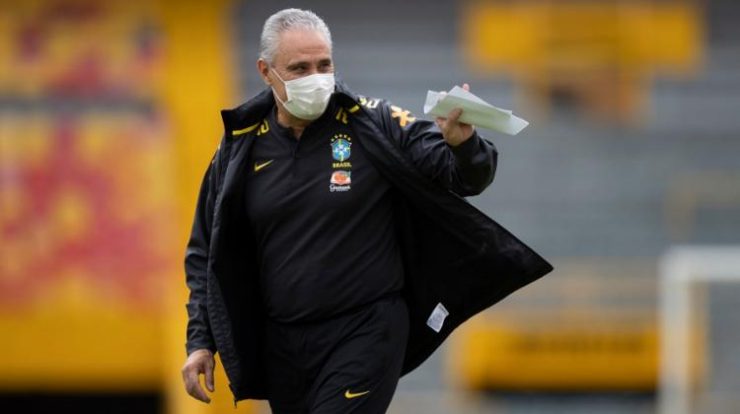 The coach of the Brazilian national team, Tite, confirmed, Wednesday, 6, that the nine players who were called up and who play in English football will not be released before the end of the three-match series that the team fought for the South American qualifiers. World Cup.. World 2022.

The coach said when asked at a press conference about the possibility of the premature return of these players, who were not released by their clubs to play in the qualifiers in September due to the lack of such a possibility at all. They were called up for all three matches. The measures to combat COVID-19 imposed in the United Kingdom.

This time the South American players who have been recalled have been exempted from quarantine service upon their return to England.

Concentrated in Bogota, Colombia, Brazil travels to Caracas on Wednesday night, where it will face Venezuela the next day at 20:30 (GMT), for the eleventh round of World Cup qualifiers in Qatar.

Also with the group, defensive midfielder Douglas Luiz (from Aston Villa, England) was called to replace captain Casemiro. The Real Madrid player has a wisdom tooth infection that prevented him from traveling.

Besides Casemiro, Tite will not be able to count on Neymar, who will miss the match on Thursday due to an automatic suspension, but he will be available to face Colombia on Sunday, in Barranquilla, and Uruguay, the following Thursday, in Manaus. .

Brazil leads the South American Qualifiers with a 100% success rate, with 8 wins in eight matches.

Assistant coach Cesar Sampaio spoke about Venezuela, which occupies the bottom of the standings in the qualifiers (4 points): “With [técnico] “Leonardo Gonzalez is the team that has played more (…) which will give more quality to the show,” said the former Palmeiras player.

In the interview, Tite also spoke about racism in Brazilian football, where only one top-tier team is led by a black coach:

There is a structural bias. What I can say is that I have a lot of respect (…) We have to fight (racial prejudice), because there is prejudice against the black coach,” said the coach.

The coach also touched on the issue of FIFA’s decision to suspend the match between the Brazilian national team and Argentina, in September, in Sao Paulo.

“Fairness is what I want, not equality because every situation has a specific analysis,” Tite commented on the duel which was suspended seven minutes after the match through the intervention of Anvisa (the national health watchdog), which accused irregularities in the Argentine delegation’s entry to the parents. .

“Let it be the right thing,” the FIFA coach asked.