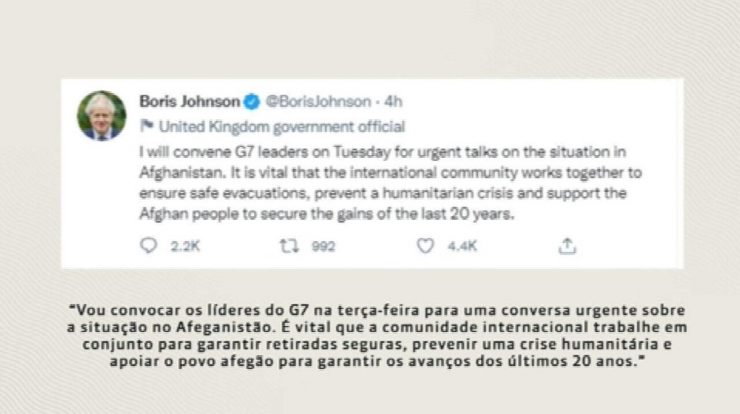 Prime Minister Boris Johnson will ask US President Joe Biden to extend the deadline for evacuating people from Afghanistan.

Johnson said that next Tuesday (24) he called a virtual meeting of the leaders of the Group of Seven to discuss the crisis in Afghanistan and asked governments to find ways to prevent the situation from deteriorating. The United Kingdom holds the rotating leadership of the Group of Seven, which also includes the United States, Italy, France, Germany, Japan and Canada.

“It is imperative that the international community work together to ensure safe retreats, avert a humanitarian crisis, and support the Afghan people to secure the rights they have gained over the past 20 years,” Johnson said on Twitter on Sunday (22).

Britain’s Armed Forces Minister, James Hebby, said there were still around 4,000 people eligible to immigrate to the country. Initial US plans to withdraw troops expire on August 31.

“Last week we learned that planned deadlines are not always within our control,” Hebe said. The longer the time, he said, the more people evacuated from Kabul.

Video: Understanding the history of the power struggle in Afghanistan

This Sunday (22), UK Defense Secretary Ben Wallace wrote a column in the Daily Mail and already indicated the possibility of requesting an extension of the deadline set by the US to leave Afghanistan.

“Maybe the Americans can stay longer, and they’ll have our full support if they stay…I’ve been saying all along that no country is going to take everyone out,” Wallace said.

An Afghan soldier was killed on Monday and three others were wounded in a clash with unidentified gunmen.