Home Economy The two candidates for prime minister, Sunak and Truss, disagree on the debate over a possible recession in the UK 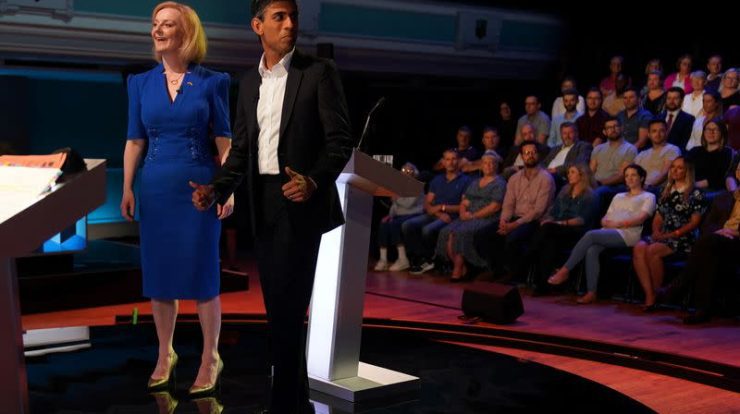 LONDON (Reuters) – British Foreign Secretary Liz Truss and former chancellor Rishi Sunak clashed on Thursday over the future of the country’s economy, as the two prime ministers discussed warnings from the central bank and the United Kingdom about a prolonged recession.

Truss is vying with Sunak for the votes of 200,000 members of the Conservative Party who will choose a replacement for Boris Johnson, who was forced to resign as prime minister after a series of scandals.

The Bank of England, Britain’s central bank, said on Thursday that the United Kingdom faced a potentially prolonged recession, with energy-driven inflation tightening household budgets. Facing this economic crisis will be the responsibility of Truss or Sunak a month from now.

Truss, the frontrunner, said the central bank’s forecast could be adjusted through tax cuts. It was the government’s decision to raise the financial burden to the highest level since the 1950s, she said, which pushed the economy into recession.

As finance minister, Sunak implemented the tax increase to pay for government aid during the Covid-19 pandemic and help Britons subsidize energy bills. The move was criticized by many activists in a party that has historically advocated low taxes.

Sunak said the expected rise in inflation reinforced his view that Truss would be reckless in increasing borrowing and cutting taxes now.

He said Truss’ plan would lead to greater inflation, and promised to cut taxes gradually.

See also  Who will be able to withdraw the benefits in 2022? Check the rules