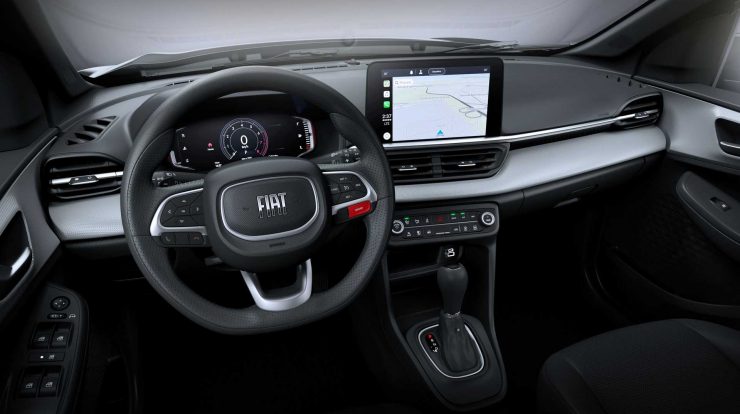 Closer and closer to its release, the Fiat pulse It officially shows its interior for the first time, ending one of the few remaining secrets about the compact SUV. As we’ve seen recently, it will have a style coming from Argo, but with changes that make it different enough, as well as emphasizing equipment like the digital instrument panel. The car will be launched between September and October.

The Fiat Pulse’s interior lines are very close to the Argo, but not quite the same. The shape of the panel parts is the same, differing in details such as the addition of a chrome line just below the multimedia and going to the ventilation holes on the sides. The ventilation in the center has also been changed, with a rectangular shape instead of a round shape in the hatchback. Fiat even changed the air conditioning controls, ditching the style seen on Jeep models.

The steering wheel is new and reminds a lot of what it is pocket for the first time with compass 2022. However, they are not the same, because the center is slightly larger. Another interesting change is the addition of the red “Sport” button on the right, rather than the button being placed in the center console as before. Since the image is from the top of the line option, it shows the cruise control controls.

Immediately behind the steering wheel is the redesigned Toro-style digital instrument panel, complete with a 7-inch full color display. As in the pickup, you can choose in different designs, such as the tachometer in blue, and change to red when the “Sport” mode is activated. The video also shows that it will have a lane departure alert, with the icon appearing in the upper left corner.

The multimedia center is another feature in the video, with a 10.1-inch screen using the same Uconnect version found on the Toro (with the difference being horizontal). It will be compatible with Android Auto, wireless Apple CarPlay as standard, and 4G Wi-Fi connectivity in more expensive variants. Fiat has already said that it will have ConnectMe, allowing it to control some of the car’s functions through a smartphone, including locking and unlocking doors, or starting the car. It will also have four standard airbags.

According to the manufacturer, the finish is covered in leather with visible stitching and other techniques to make the cabin more refined. “Unprecedented in the Fiat range, the Pulse interior finishes developed ensure a modern and comfortable environment for occupants. We’ve brought in new technologies that help differentiate surfaces,” said Isabella Viana, Director of Colors and Materials, Mopar, Graphic and Virtual Reality at the South American Design Center Such as laser texture and exclusive fabrics, as well as special paintings and finishes.

The Pulse will be offered with two engine options. Base models will bring the 1.3 flex with a capacity of 109 hp and 14.2 kgf/min, combined with a 5-speed manual transmission or an unprecedented CVT-type automatic transmission. More expensive versions will get the new three-cylinder turboflex 1.0 engine, which should deliver around 120 hp and 20 kgf per minute, along with a six-speed automatic transmission. It will also bring the TC+ differential lock functionality that Strada also supplies.

The Fiat Pulse will arrive in dealerships across Brazil between September and October, with pre-sale likely to start shortly before then. Expect prices between R$80,000 and R$110,000, lower than the Jeep Renegade (which would be a “premium” option from Stellantis in this segment) and less expensive than the second SUV that Fiat is gearing up for for 2022.

Listen to the Motor1.com podcast: