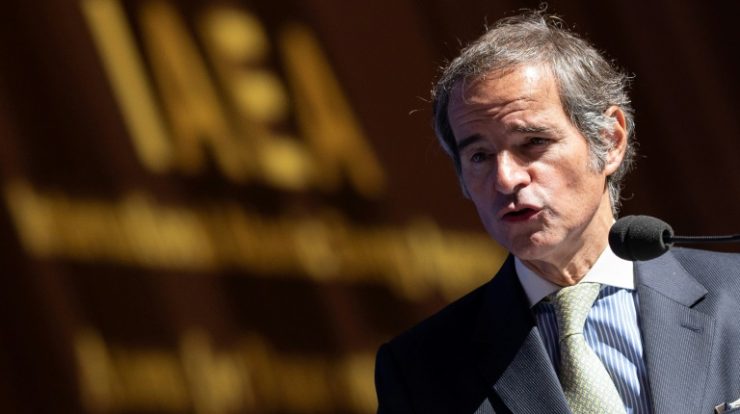 Iran hopes that the visit of the Director General of the International Atomic Energy Agency, who will arrive in Tehran on Monday night (22), will be “constructive”, a week before the resumption of negotiations in Vienna with major powers in an attempt to salvage the agreement on Iran’s nuclear program.

“We hope that Rafael Grossi’s visit will be as constructive as the previous one,” Foreign Ministry spokesman Saeed Khatibzadeh told a weekly news conference.

The meetings are being held in Tehran a week before the resumption of negotiations in Vienna, which have stalled since hardline conservative President Ebrahim Raisi came to power in June.

The agreement concluded in 2015 between Iran on the one hand and the United States, the United Kingdom, China, Russia, France and Germany on the other, aims for Tehran to lift some of the international sanctions stifling its economy in exchange for a radical reduction of its economy. The program has been put under strict supervision by the United Nations.

But the United States abandoned the agreement in 2018 under the presidency of Donald Trump and reimposed sanctions. As a result, Tehran gradually abandoned its commitments.

Current US President Joe Biden has stated that he is ready to return to this agreement, provided that Iran at the same time resumes the agreed restrictions.

Grossi’s visit to Tehran comes after the International Atomic Energy Agency announced last week a significant increase in the amount of highly enriched uranium produced by Iran in recent months.

“If Iran continues at this pace, it will be impossible to reap benefits even if it returns to the deal,” US envoy Rob Malley said on Friday.

For his part, Khatibzadeh accused the United States of launching a psychological campaign against his country.

“The belief that these statements (the Americans) can sell false rhetoric to the international community to create a psychological environment while approaching the Vienna negotiations will not help them at all,” he said.

On Saturday, US Defense Secretary Lloyd Austin said all options are on the table, especially if diplomacy fails.

When asked about the possibility of US military intervention, the Iranian foreign affairs spokesman quipped: “We have seen all the options in Afghanistan and they have seen the result. I don’t think they believe what they say.”

+ Horoscope: Check today’s forecast for your horoscope
+ Video: Driver leaves a Tesla on autopilot and falls asleep on the SP highway
+ Food Stamps: Understand changes with new rules to benefit

+ Find out the most stolen cars in SP in 2021
+ Expedition identified the giant squid responsible for the shipwreck in 2011
+ Everything you need to know before buying a cooking pot
+ Discover in Armenia the eastern channel of the Roman Empire
+ USADA warns: Never wash raw chicken
+ Attacks passengers and pulls out a steward’s teeth
+ Aloe vera gel in the drink: see the benefits
+ Lemon Squeeze Trick Goes Crazy On Social Media