Home sport In the UK, foreign students stifled by the epidemic 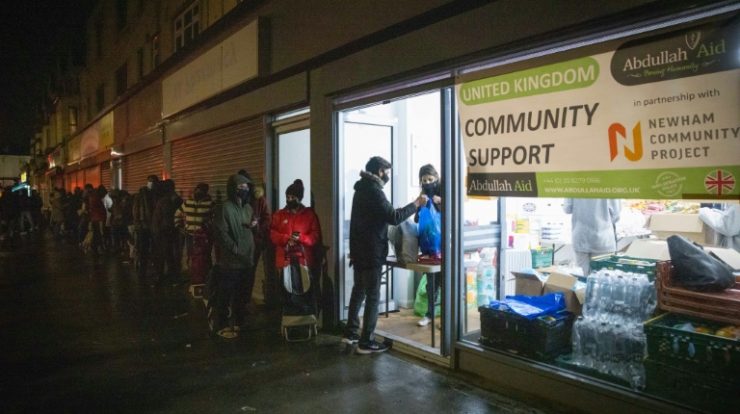 “Food is hard to buy, prices are much higher than in India”: Without work or government assistance, the young foreign students who, like Jay Patel, have come to the UK to realize their dreams, are plunging into poverty because of the pandemic.

Despite the rain, dozens of young people like him, with bonnets on their heads and shopping bags in hand, crowd the small room of the Newham Community Project Association in east London to receive rice, some vegetables and other food.

“My condition for coming to the UK was that my parents never once asked for money here,” says Jay Patel, 19, a student at the University of Greenwich. “I didn’t talk to my parents about my situation because the pandemic is hard for them too.”

Without the help of this food bank, which distributes three nights a week, “it would be difficult” for him and his tenants, between the very high university fees and the cost of living in London: “We will certainly go hungry.”

“I really came at the wrong time,” he sighs.

The UK is a popular destination for international students, the European country with the highest number of deaths due to the pandemic (around 120,000), but also the country suffering the most from the economic crisis. England has entered its third confinement since last year, making finding a job nearly impossible.

Inside, they get busy serving the students as fast as they can, throwing bags of rice. On the floor are hundreds of bags of food, carefully prepared in advance, with options for vegetarian or halal meals.

This local assembly, rooted in the Indian community in East London, began distributing during its first imprisonment, when the month of Ramadan began.

“Initially we distributed 20 packages per day,” explains Elias Ismail, its manager. “In three weeks, we’ve moved to over 800 students!”

“The need is huge. We did it ten months ago and the number continues to grow,” he estimates, now serving about 2,000 homes a week, sometimes with apartments shared by 15 students.

Most affected by the crisis are non-European youth, who, according to the Higher Education Statistics Agency, were more than 400,000 in 2020, mostly from China and India.

In Newham County, 99% of those who come in search of food are Indians: “Poor students, whose parents sometimes had to sell family jewelry to force them to leave,” Elias said.

“Because of the type of visa, they cannot get financial aid from the government or universities,” adds Amina Ismail, a 21-year-old volunteer, and believes that “the government should do something about this unfair policy.”

“It is really heartbreaking. They came with their hope for a better life and suddenly Covid came and destroyed everything.

Such is the feeling of 23-year-old Alp Sheikh, who came to the UK to fulfill his parents’ “dream” of “getting a real education” that he had never seen before.

Six months after his arrival, confinement arrived. “Since then, things have gone from bad to worse,” explains a master’s student at the University of East London.

Between lack of money, social life and online courses, “it’s not worth it” to come to the UK to study at the moment, he thinks: “I’m paying for a Rolls-Royce, getting an old Toyota.”

Mohamed Ahmed, 25, has been joining the association for three months. He followed his wife who is studying at BPP University.

“We had a lot of expectations about coming to the UK to live, and because of the pandemic, they were frustrated,” he sighs. “If this continues, we will have to go home. We cannot survive like this.”

+ You also have Istoé on Google News
US agency warns: Never wash raw chicken الدجاج
+ Model Miyara Rossi celebrates her mother’s recovery
+ Seu Jorge loses the operation and will have to pay 500,000 in compensation to the family of Mário Lago
+ Juliana Paes appeared in a simple bikini at a Valentine’s Day rehearsal
+ Yasmine Brunet breaks the silence حاجز
+ Gordon Ramsay’s daughter reveals she was sexually abused
+ Chocolate fondue easy to prepare with fruits
+ The shark was caught in MA with the remains of the young lost in the stomach
+ Giant anaconda spotted on paparazzi trips at MS