Home sport ‘I want this to be the norm’: Vanja Cernivic hopes more women get leadership roles in sport 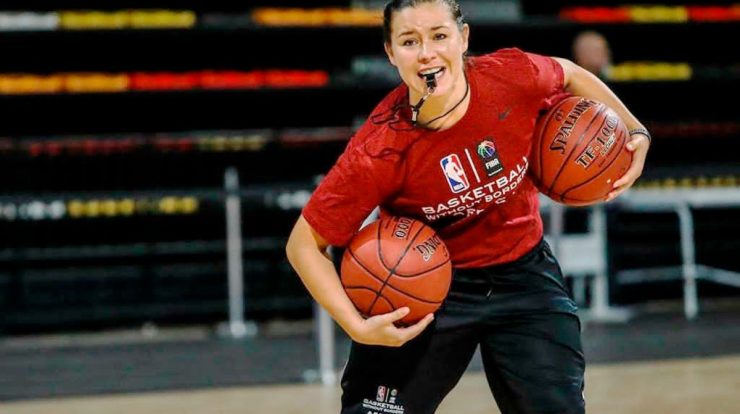 The new general manager of the London Lions women’s team, Vanja Cernevik, hopes the next generation of ambitious women in sporting leadership roles will be seen as the norm rather than trying to break new ground.

Cernevic, who was born in Slovenia, took up her role last month, which also includes becoming global director of the London Academy for Lions, the first woman to run a British Women’s Basketball League team.

Cernivic’s appointment follows a successful stint as an international scout for the Chicago Bulls – becoming the first woman in NBA history to hold the position.

A survey commissioned by Lions revealed that 44% of women are unaware of athletic career opportunities outside of sports.

Part of the study, which was conducted on a nationally representative group of 2,090 participants, showed that another 41% said there were no role models in sports management to look up to.

After England’s success at Euro 2022, the image of women’s sport is now front and center.

It’s a position that Cernivic believes can only help show that there is a clear path for anyone to take on leadership roles within a sports organization, regardless of gender.

“I want that to be the standard. I don’t want to have this conversation every time I talk to reporters. I want to get out of this conversation and start talking about the role of GM, what it takes for the team to be successful,” Cernevic told the Palestinian News Agency.

“I understand I have to be upfront on this part as well and support women to push this agenda forward, but on the other hand I’m a general manager – and if you were talking to a male GM, we probably wouldn’t have that conversation, right?

“I would say the pressure has to be on other teams to hire (in) the same roles.

“I think it’s a big statement from the 777 (the owners of the London Lions) that they’ve already appointed this position, and that it doesn’t matter who he goes to.

“The fact that I am a woman and I am now in this position probably gets more media coverage because of that.

“The England football team have done a fantastic job of showing some leadership that young girls can now look forward to.

“But these high-level jobs that women get at the NBA level aren’t enough.

“We need to do more at entry level for women to learn about entry-level jobs and grow within organizations and have training experience, from an office or whatever company you see. This is how — and not just women, but minorities (too).

“I’m really a believer that diversity brings invulnerability – whatever you do in life you need to (be) diverse and that continues to hire people too.”

Cernivic, 40, is taking on his new role with the Lions Women’s Team to build on the success of last season, which saw them complete the House Cleanup of the Play-Offs, Cup, Trophy and WBBL Championship.

New signings Micia Herbert Harrigan, Katsiarina Snitsina and Taylor Murray have arrived to support the team ahead of the upcoming FIBA ​​Cup schedule.

However, Cernivic also hopes to use her tenure as global director of the London Lions Academy to help raise the prospect of potential future development.

An estimated 1.3 million people regularly play basketball in the UK, making it the second most popular team sport after football, but it has historically not been as centrally funded as others.

Cernivic believes that focusing on fun for younger age groups through the “mini-basketball” format can be a huge success, as is the case in other European countries.

“I’ve seen it in Spain, in the Czech Republic, a lot of European countries are using it even under 12, so kids play with a five-size ball and smaller hoops,” Cernivik said.

“I saw kids having fun and the scores were from 70 to 100. They were able to do all the movements they could see and then (when they got older) moved on to the natural arc.

“I think installing little hoops around the country so that kids can really enjoy the game at this age would be very important.”

See also  Facebook and the International Paralympic Committee have launched a global film series to highlight the 15% of the world's population with disabilities.