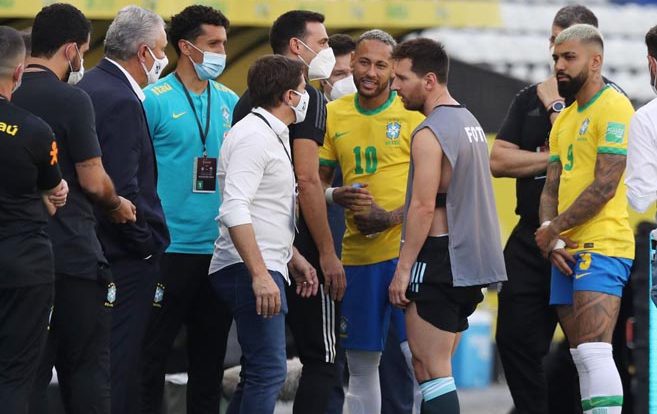 FIFA has opened an investigation into Argentina’s World Cup qualifier match between Brazil and Argentina, with its president Gianni Infantino describing the events as “crazy”, while Tottenham Hotspur (England) was cited as being ready to take disciplinary action against its Argentine players.

Agents from the National Health Surveillance Agency (Anvisa) took to the field last Sunday (5) after four Argentine players playing in the English Premier League were accused of violating Brazil’s quarantine rules for the novel coronavirus.

Aston Villa (England) goalkeeper Emiliano Martinez and Tottenham duo Christian Romero and Giovanni Lo Celso at Corinthians Stadium, in Sao Paulo, were part of the Argentine squad when Anfisa’s agents entered the field and halted the match five minutes into the first half.

Aston Villa midfielder Emiliano Buendia also traveled from the UK and was in the stands.

Anvisa said the rules make it clear that travelers who have been to the UK, South Africa or India in the last 14 days are denied entry, unless they are Brazilian citizens or have permanent residence.

FIFA said it had received reports from referees and was gathering more information.

“The information will be analyzed by the appropriate disciplinary bodies and a decision will be taken in due course,” FIFA said in a statement.

In a video of the European Club Association (ECA) General Assembly, Infantino said the situation served as a reminder of the difficulties the organization has faced during the pandemic.

“We saw what happened in the match between Brazil and Argentina, two of the most brilliant teams in South America. It’s crazy, but we need to deal with these challenges, these issues that come on top of the Covid-19 crisis,” Infantino said.

The Argentine Football Association (AFA) said that Martinez and Buendia have left the ranks of the national team, which means that they will not participate in Friday’s match against Bolivia.