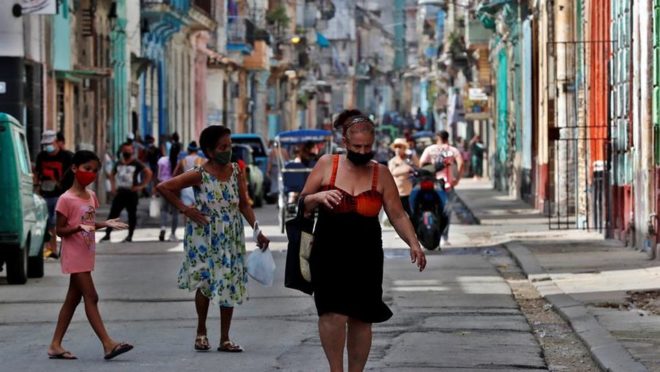 The Cuban government has denied the need to open a humanitarian corridor to receive foreign aid in the worst wave of the coronavirus pandemic on the Caribbean island. However, the Cuban Ministry of Foreign Affairs recognizes that the situation in the country is very complex and has requested external contributions through the official channels of diplomacy.

“Some refer, intentionally and manipulatively, to the need to implement humanitarian corridors, for humanitarian intervention,” says Ernesto Soberon, Director General of Cuban Consulates and Residents Abroad. “These are concepts and terms related to situations of armed conflict, and serious violations of international humanitarian law, which have nothing to do with what is happening in the country,” Soberon stresses.

Cuba is going through the worst moment in the pandemic. And the Ministry of Public Health (MINSAP) reported, on Saturday (10), the country’s registration for the third consecutive day of cases and deaths, with 6,750 injuries and 31 deaths. Hospitals are overburdened in the worst-hit provinces – especially Matanzas east of the capital, Havana – and the country has been seriously short of medicines and essential hospital supplies, such as oxygen, for months.

Artists, citizens and organizations from different countries have started a campaign on social media to demand the opening of a humanitarian corridor that will allow the health crisis to be faced on Cuban soil. Campaign organizers, using the hashtags #SOSCuba and #SOSMatanzas, are also organizing in and out of the country to raise money, medical supplies, food and other supplies to send to the worst-affected places.

The representative of the Ministry of Foreign Affairs requests foreign donors to make their contributions through Cuban embassies or official associations of Cubans in the countries in which they reside and also through transfers to an account opened by the government and available on official websites. “There is a campaign to present Cuba as a complete anarchy,” Soberon criticizes.

The government’s response comes after many celebrities joined the #SOSCuba campaign, which attracted strong international interest. Part of the campaign’s supporters are critical of the government, which is blamed for exacerbating the epidemic.

However, the Cuban government continues to assert that the main cause of the economic and health crisis is the financial and trade embargo imposed by the United States.