Home Economy Coronavirus: vaccination advances one country after another: fast in the richest, not much in the poorest | Society 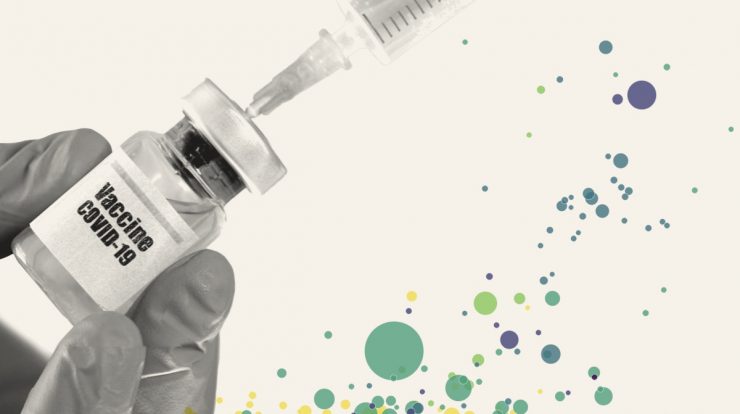 Inequality in access to vaccines has been a constant concern in the largest vaccination campaign in history, and nearly six months after it began, the world is effectively divided by wealth. Countries with more than 30% of the vaccinated population are affluent or relatively wealthy, while virtually no poor country has achieved 10% of immunization. GDP differentiates the countries that are vaccinated at a good rate, many of which multiply the covid-19 curves.

As the chart above shows, the countries of North and Central America were the fastest advancers at first, driven mainly by the United States, where half of the population has already been vaccinated. But the European Union has been the fastest-moving since April, when vaccine supplies doubled. Current pace means giving a dose to 5% of the population every week.

Not surprisingly, the continents have actually been grafted at the pace of their national income: with Europe and North America advancing over South America, which in turn is going faster than Asia and Africa. The related exception is Oceania: Neither Australia nor New Zealand has vaccinated many people, even though they are rich countries, for sure because they managed to keep the virus nearly suppressed (their deaths due to COVID-19 in this year and a half of the epidemic 490 17,000 times less than Brazil. , Respectively – also due to the difference in size among its population numbers).

The relationship between vaccines and wealth is more evident when we look at countries. This is shown in the following graph, which represents GDP per capita (horizontal axis) and the vaccination level so far.

Almost all countries with a population of over one million that already have at least 30% of the population already vaccinated (at least one dose) have a GDP per capita as high, above $ 20,000 per capita. The only exceptions are Serbia and Mongolia. The same is true at the other extreme: there are only four poor countries (less than $ 10,000 in per capita income) that have vaccinated 10% or more of their population – India, Morocco, Cambodia and El Salvador.

And even greater delays in immunization, in countries that are already characterized by strong internal inequalities, have consequences: “We are already seeing in India and Brazil how the collapse of the health system affects tourism and the economy: just as tourists will not go, so companies think more about whether it is about opening or moving Your work there, “explains Geoffrey Lazarus, an epidemiologist and researcher at the Institute for Global Health in Barcelona (ISGlobal).

There are a few countries that are exceptional because they only immunize a little when they are rich. This is the case with Australia, New Zealand, Japan and South Korea, which share success – or luck – in containing the virus. A recent study in the journal The scalpel They cited them as examples, in the Organization for Economic Cooperation and Development, of the benefits of the strategy to eliminate (but not mitigate) Covid-19, in terms of health as well as economic.

The first goal of the vaccine is to prevent the vaccines from contracting dangerous diseases and dying. We know that the first goal is being achieved: according to the calculations of the Complex Systems Group of the Polytechnic University of Catalonia, the level of vaccination in Spain at the end of April (25% of the protected population, especially the elderly) should already be sufficient to avoid 80% of the resulting deaths On the Covid-19 virus. But the vaccine will also be effective in preventing infection. A British health report estimates this protection to be 70% to 90% after a second dose of Pfizer. If these numbers are confirmed, the question is whether they are sufficient to induce the immunity of the desired group.

This depends on many variables. Basically, we want to keep the reproductive number (R, which estimates the transmission speed) less than one. This number depends on several components. On the other hand, how many people have been vaccinated (either because they went through the disease, or because they were vaccinated and the infection was prevented, or because they were not transmitted). On the other hand, through contact between people, these interactions are now reduced, but will increase. It also affects the likelihood of transmission, and the propensity to infect someone with the infection, which in turn depends on other things, such as climate or the ability to transmit each variable.

This complexity makes it difficult to estimate when group immunity will be achieved, assuming it is possible. According to calculations made by the UPC in the European Union, with a level of communication such as the current level or slightly higher, it would be sufficient to vaccinate 33% to 50% of people until the virus stops spreading. But this would preserve the restrictive measures, while normal life would require more immune people, perhaps much more.

Most vaccinated: 40% of the population

Below, we explain how the infection developed in different countries as vaccination progressed. We start with the countries with the largest vaccinated population.

The most successful case is Israel. There, vaccination coincided with strict confinement, and COVID-19 cases were practically reduced to zero. The vaccination progress also coincides with a decrease in cases in the United Kingdom, the United States of America, Mongolia and Chile, which also vaccinated more than half of their population.

But the infographic also reveals that it is possible to experience a severe outbreak despite vaccinating several people. This is the case of Uruguay, a country that until November succeeded in protecting itself from the virus and vaccinating it quickly in the first months of the year, but in mid-April it recorded a significant outbreak of transmission in sensitive places, such as homes for the elderly. Also in Bahrain, where infection has increased again even with 40% of the population vaccinated. This can occur due to heterogeneity – if certain social groups are not vaccinated – or a combination of factors: if a newly vaccinated increase their interactions too early, if other restrictions are relaxed, or if all vaccines are not all equally effective.

In Chile, cases rose again in mid-March, when 30% of people had already received at least one dose. So authorities have revised their strategy, due to signs that the most used Sinovac vaccine to date, needs a second injection in a short period of time to provide strong protection (with the first one being 25-30%, compared to 80% Pfizer). In this case, as one study indicates, there was also an increase in contacts who facilitated the call. Now, two months later, infections in the country are decreasing again.

These numbers recall the challenge of returning to normal life, as Lazarus points out: “It will not be easy to continue growing after reaching 50%. We are already seeing that in the United States there are many people who are not completely convinced, and moreover they are spread across the regions. Rural areas without the necessary health infrastructure; or young people do not find vaccination necessary or urgent as is done in the United Kingdom. “

The second group of countries we’re looking at are those where a third of the population has already received a dose. These are all European countries that, in addition to having similar levels of vaccination, are coming out of the winter, which should help control the virus.

In the last graph, we focused on Latin America, where the virus has evolved at very different rates in recent months. Some countries in the south of the region have witnessed a high rate of infection with the onset of winter, such as Chile, Argentina and Uruguay. In Central America, records have been falling, except for Costa Rica, where it is captured.

The continent adds a variable to the puzzle: the extent to which strains are more transmissible, such as the P1 discovered in Brazil that later jumped to several neighboring countries. This variant appears to spread more easily, although vaccines have proven effective against it.

Vaccinating more people will help mitigate the virus. But as vaccination progresses, we will have to continue to strike a balance: We will be able to restore contacts and ease restrictions, but only at a pace that allows for the level of immunization, transmission and seasonality of the virus. The game will be simpler than it has been in recent months, and perhaps more lenient, but it will continue to be a juggling game for at least a while.

Participation Here To receive the daily newsletter from EL PAÍS Brasil: reports, analyzes, exclusive interviews and key information of the day in your email, Monday through Friday. Participation Also, receive our weekly newsletter on Saturday, with highlights of coverage during the week.