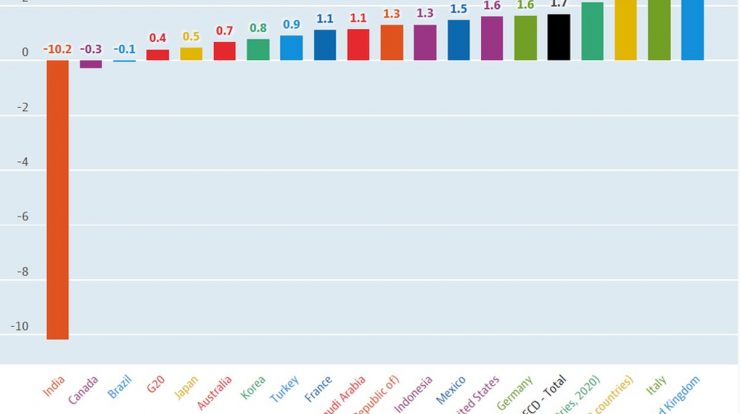 Brazil’s Gross Domestic Product (GDP) performance in the second quarter of 2021 was the third-worst among the G-20 – the richest group of countries. This is indicated by the report released on Wednesday (15) by the Organization for Economic Co-operation and Development (OECD).

The Brazilian economy contracted by 0.1% in the second quarter, compared to the previous quarter, a result that was only ahead of the performance of Canada and India, which recorded declines of 0.3% and 10.2%, respectively. The best performance was in the UK, up 4.8%. See the chart below:

Brazil had the third worst growth among the G20 countries in the second quarter – Photo: Disclosure / OECD

However, the OECD report does not include the GDP result for Argentina, Russia and South Africa, which have not yet provided consolidated figures.

Slowing GDP growth for the Group of Twenty

The report shows that economic growth in the group of richer countries slowed to 0.4% between April and June, down from 0.9% in the first quarter, but with significant differences between economies.

The gross domestic product of the G20 region as a whole exceeded the pre-pandemic level (Q4 of 2019) by 0.7% in the second quarter, primarily driven by China, whose activity is already 8.2% above its pre-Covid level.

“However, most countries are still lagging behind pre-pandemic levels, with India showing the largest difference (at 8.1%), followed by the United Kingdom (at 4.4%) and Italy (at 3.8%),” explains the OECD.

Brazil ended the second quarter 0.1% below the level at the end of 2019, according to the report.

The United States exceeded the pre-pandemic level by 0.8%.

After three consecutive hikes, the Brazilian economy fell 0.1% in the second quarter