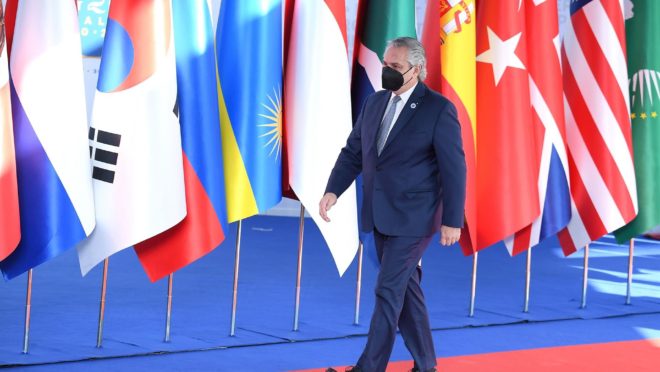 argentina president, Alberto FernandezHe advocated, this Tuesday (2), in a speech during the 26th United Nations Conference on Climate Change (COP26), the “debt exchange for climate action” system, to achieve decarbonization of the global economy.

“To advance the necessary transformation agenda, we must establish payment mechanisms for ecosystem services, exchange debt for climate action, and establish a concept of environmental debt,” the head of government said during the summit in Glasgow, UK. .

Fernandez noted that “it is necessary to apply the issuance of private equity capital by the International Monetary Fund (IMF) to a large pact of environmental solidarity, which includes low- and middle-income countries and works to extend the maturities of debt and investment interest rates.”

“Argentina does not intend this COP to remain in words only, so we will propose the creation of a Political and Technical Committee on Climate Finance, with equal representation from developed and developing countries, to work out a plan on how to mobilize the necessary funds,” the president said.

According to Fernandez, the group should recognize “principles of common but differentiated responsibility” and “take account of indebtedness and structural constraints, as well as social welfare needs.”

“Countries like Argentina, through their ecosystem, support the livelihoods of the entire planet, while making a decisive contribution to food security,” said the head of government.

During a speech at COP26, Fernandez highlighted that the government he leads has raised its carbon emissions reduction ambition by 27%, in relation to commitments adopted after the Paris Agreement, in 2015. In addition, he stated that it is working with measures to eliminate decarbonization. Illegal Forests”, among other projects.

“The pandemic health crisis has done nothing but strip a much larger crisis of unsustainability and imbalance, affecting the environment and the economy,” Fernandez said.

To defuse the situation, the Argentine president called on everyone to assume “common, albeit differentiated, responsibilities”, with means that would allow “a transition to a clean economy, with lower carbon emissions and resistance to the effects of climate change.”