Home sport Anvisa is looking for Willian, of Corinthians, and trying to avoid his debut against Atlético-GO 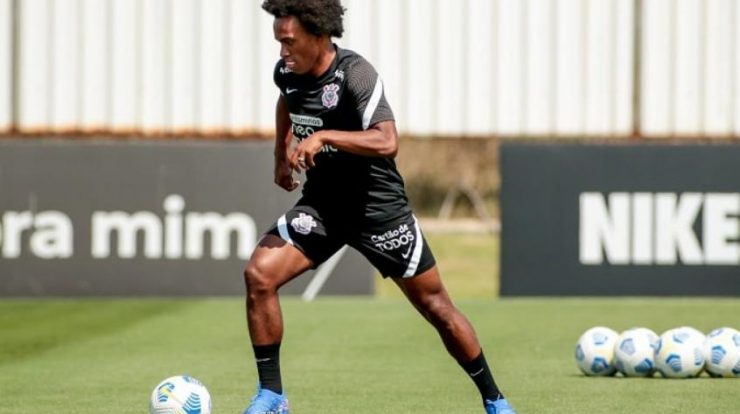 Anvisa (the national health monitoring agency) has reported that Willian, from Corinthians, has failed to comply with the 14-day quarantine and, therefore, should not face Atlético-GO on Sunday, in Goiânia, for the Brazil Championship. The athlete was in Brazil 11 days ago.

The isolation period is mandatory for Brazilians coming from the UK, where the striker played for Arsenal (ING), as stipulated in Ministerial Decision No. 655/2021. This measure is justified by the dominance of the delta variant, Covid-19, in the European country.

On Saturday (11), the agency’s inspectors went in search of the player in the capital of Goiás, where the Corinthians squad is concentrated in one of the hotels. There is no information on whether or not Willian has been found. So far, Corinthians has not released the list of players related to the match.

Hours ago, this Saturday morning, Willian was told that the health staff came to his house to check on his condition. When agents of an unknown agency visited the athlete’s home, he was not there, as he was training at CT Joaquim Grava.

The person who greeted the group of inspectors informed Willian of what had happened and soon the news reached the Corinthians captains who were quiet about the No. 10 shirt being involved in Sunday’s game.

According to a decree published in the Official Gazette of the Union on June 23, foreign passengers from England are prohibited from entering the country. However, for Brazilians who come from English lands, there is no such restriction, but it is recommended to adhere to the 14-day quarantine period, a profile that suits Willian, hired by Timão.

Despite this check regarding Willian’s health status, Corinthians see themselves as legally protected to be able to pick the player in Brasileirão, as he has already tested negative for Covid-19 and has no game restrictions. The club uses the case of Andreas Pereira, who was signed by Flamengo and joined by Manchester United, from England, as a benchmark for the scenario in which it was not a problem, as the defensive midfielder arrived and actually played.

Check out the full note from Anvisa on Willian’s case:

“Player Willian Borges da Silva, of Corinthians, who entered Brazil via the United Kingdom in the last 14 days prior to his arrival, is in the quarantine period, as stipulated in Ministerial Order 655/2021.

There is information that the athlete will play tomorrow, Sunday (12/09), in Goiania, at the Antonio Axioli stadium, against Atlético Goianianzi, not complying with the Brazilian health rules.

In light of the information in the aforementioned Player’s Health Traveler Declaration (DSV) about their transit through the UK, Anvisa, at Guarulhos Airport, issued the Term Traveler Health Monitoring – TCSV dated 09/01, to inform about a mandatory 14-day quarantine. The traveler informed and signed the TCSV, undertaking to comply with the applicable state health regulations.

After the procedure already established for cases of Brazilian travelers coming from areas subject to temporary restrictions, the Anvisa coordination in Guarulhos on the same date sent to the epidemiological surveillance duty in São Paulo and to the information network of the Ministry of Health. player, for his active monitoring and control.

On 06/09 and 08/09, Anvisa repeated the information, asking for feedback on the measures taken. The agency also contacted the Strategic Information Center on National and Local Health Surveillance to accompany the traveler.

However, considering that recent unofficial news has reached Anvisa aware that the player has been circulating in training and will participate in the game this Sunday in another state of the federation, Anvisa immediately notified CIEVS to take the necessary action with the state or municipal health watchdog to comply with the measures health, in order to prevent the player from not complying with the quarantine period.

This Saturday (11/09), Anvisa issued an official letter to the Brazilian Football Confederation (CBF) and to Sport Club Corinthians Paulista, warning the player against signing a TCSV with Anvisa and banning him from participating in activities such as training and football matches. And he must comply with self-isolation, under penalty of civil, administrative and criminal liability.

Goiânia municipal health watch has also been activated and the hotel where the Corinthians are located has been located so that it can operate.

Finally, it should be clarified that in the case of the game in Brazil, Anvisa contacted the Federal Police due to the fact that there is a breach of immigration law practiced by foreigners when they enter Brazil. In the case of player William, a Brazilian who entered Brazil regularly and had to comply with health measures at the destination, in accordance with Order No. 655/21.

Anvisa considers the situation a serious health risk and expects action by the local health authorities, to take the necessary inspection measures, and to determine the immediate quarantine of the player. It should be noted that, as a Brazilian citizen, the local health authority (state or municipal secretariat) must carry out and monitor isolation measures, including the activation of police powers, if necessary.

In the case of the player Andreas Pereira, of Flamengo, the press reported to Anfisa that the player was selected and played at Santos, on 28/08.

In this case, the player entered Brazil on 08/20 and also filled out a TCSV, with the obligation to comply with the health measures set out in Decree 655/21, including a mandatory 14-day quarantine, having passed through the UK in the last 14 days before Entering Brazil.

In light of the facts, Anvisa notified the local CIEVS to take appropriate health measures, in order to punish the player and others involved in organizing the match, without prejudice to the assessment of civil, administrative and criminal liability of those involved. . “