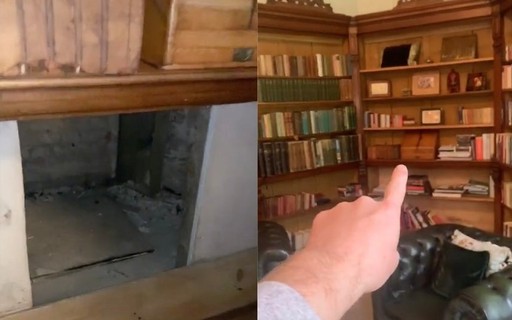 Real estate developer Freddy Goodall has discovered a secret passage in a 500-year-old home in Brighton, Sussex, England. On site, tunnels, rooms and even a safe with old books.

According to the New York Post, he was looking at old photos of the property — which had been in his family for 30 years — when he noticed the 16th-century home’s library door could no longer be seen. He recorded a video in which he found a passage behind a bookcase and posted it on the networks, illustrating the discovery (Watch the end).

When he removed the books from the shelves, removed the screws from the plank, and lifted them, Goodall found an empty dark room behind the fireplace. The secret passage led to underground rooms, with a staircase in one of the tunnels and a larger room at the top, filled with cobwebs, dust, and a wasp’s nest.

Another corridor leads to a cellar, two other secret rooms, and another corridor with stairs and several corridors, which could have been used by the staff to facilitate access around the property.

There were even mysterious names and dates written in chalk on a brick wall and an old safe that has been untouched for decades. Inside, books dated 1848 are full of information about the property – in the 20th century, the house could have been used as an educational institution – and letters.