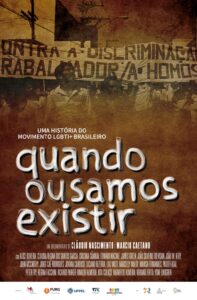 Called “When We Dare To Exist – History of the Brazilian Gay Movement +”, the feature film that brings the vision of activists from the 70s and 80s, about the historical paths of this movement, will be shown on Thursday (04/28), at 6 pm, to guests at Teatro Alcione Araújo – Biblioteca Parque, in downtown Rio de Janeiro. After the screening, there will be a round of talks with the film’s directors and activists at the time.

Recorded between 2017 and 2019, with activists who worked in the states of Rio Grande do Sul, Rio de Janeiro, Pernambuco, Bahia, São Paulo, Sergipe and Ceará, in the 1970s and 1980s, the team challenged the Brazilian territorial extension to find some of the people who founded the Brazilian gay movement. Between coming and going along the roads of this vast country, some memories have been rediscovered in defense of gay democracy and citizenship.

With a script and directed by Claudio Nascimento and Marcio Caetano, the documentary “Quando Ousamos Existir” deals with, through interviews, the historical trajectories of the LGBTI + social movement, from its emergence in the middle of the military dictatorship to its participation in the debates of the Constituent Assembly, which went through the early years of the AIDS epidemic and the struggle against The pathological character of homosexuality. Through the activists’ accounts, the intense political and cultural struggle for gay liberation and affirmation in Brazil is revived right up to the first actions to promote citizenship.

In more than 40 years, the homosexual movement has become LGBTI+, accompanied its transformation and contributed to significant changes in society and in the performance of the Brazilian state in defense of citizen democracy.

Check out the trailer for the documentary When We Dare to Exist.