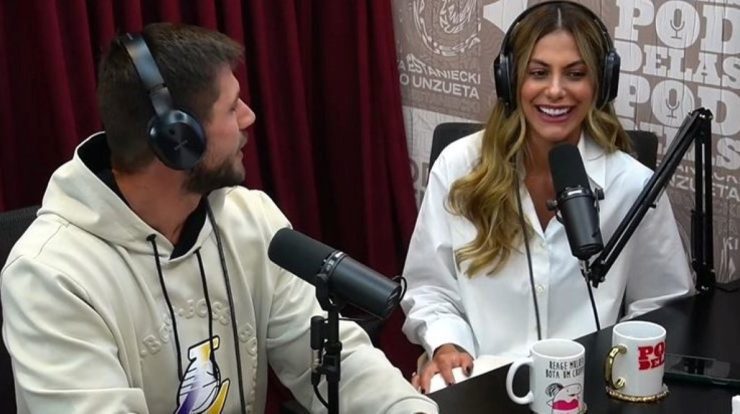 Marie Gonzalez flops in an interview with her fiance Jonas Solbach

Mary Gonzalez He made another slip and became the topic again on social media. The ex-BBB and ex-panic shared the Pod Delas podcast along with her fiancé, Jonas Sulbach on Thursday (16).

During the scene, the couple were talking about how they proposed to marry during the turn of the year from 2021 to 2022. However, the influencer mixed up the word “general.”

+ Simon speaks for the first time after the removal of Simaria and the sister’s accusations: “I saw it”

He shot “I was ready to break the anus.” Then Jonas couldn’t hold his laughter and the podcast interviewers couldn’t stand it either and burst out laughing.

After that, Mary had a hard time completing the story. “There is no way, I was born to be a meme. I accept myself.”

After recovering, Mary said Jonas talked about the stars and asked her to come down the curb, at which point he asked her to marry him. Mary also said that she was not suspicious until he took the rings out of his pocket, which surprised her before accepting the request.

The influencer has already said a lot in an interview

At the beginning of the year, I interviewed Marie Gonzalez on the podcast “Pod Delas”, on Youtube, presented by Tatá Estaniecki and Bruna Unzueta.

In her post, it seems that Marie talked a lot about the Globo channel production and was reprimanded.

The former BBB was talking about the possibility of Jade Picon being on the reality show and some news on Multishow.

+ Ex-BBB Lumena attacked with feces and vents in tears on social media: ‘I can’t stand it anymore’

As soon as the phone started ringing, presenter Tata Istaniki asked her to answer it. “Hello? Hey? Lie,” he began to say.

And he continued, “You can talk, I’m alive. Me. Well, well, my kisses,” he finished and hung up the phone.

At the same time, Bruna asked if she could say something that could not be said. “What do I say now? I don’t know how to fake anything, it was out of production, and I don’t know what it is,” she explained.

Bruna still insists, “But is it a good thing or not?” Mary Gonzalez, in turn, immediately wanted to change the subject: “I don’t know. Do you have more champagne?”