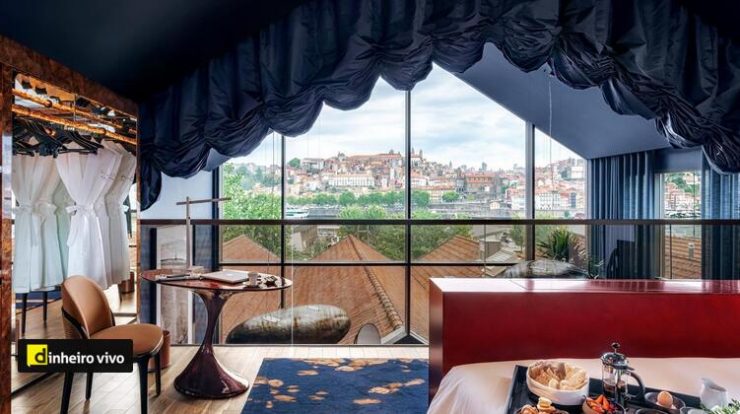 The view of the riverside area of ​​Porto is perhaps the best calling card for the latest tourism venture of Mario Ferreira, an entrepreneur who started in the Douro river cruise business and has expanded his business to include cruises. And hotels, real estate and more recently to the media, with the acquisition of TVI. But even the unique and picturesque homes that have attracted so many tourists in recent years cannot cope with the negative effects of the epidemic in this sector. However, The Lodge decided to stand the tide and, a little over a year ago, opened the door to its 119 luxurious guestrooms, built in the space once occupied by Port wine cellars in Real Companhia Velha, Gaia.

Far from the initial expectations, the hotel has sailed along with the waves of the pandemic, with a fluctuating occupancy rate, a team that is still half what is expected, and despite vaccinations in Europe, with the inherent uncertainty of the spread of the virus in the markets Bets – UK and Germany France, Spain, North America and Brazil. The success of the investment, valued at more than 30 million euros, is rooted in the architecture and design of the space, inspired by the theme of the winery and in a strategy based on the Portuguese identity. As all of this will eventually pass and it’s time for family celebrations and the joy of the New Year to come, The Lodge is already programming for Christmas and New Years, where D. Mary’s Restaurant will feature prominently.

While waiting for these festive times, the five stars carved into the facade wall, beneath the copper letters that make up the name of The Lodge Wine & Business Hotel, are indeed an invitation to enter the exclusive environment, wrapped in the objects, design materials and tones characteristic of portraits of Port Wine Cellars. Corks, barrels, antique baskets, bowls, trunks or leaves of chrome are the raw materials that inspired designer Nene Andrade Silva to create the various decorative elements for the hotel’s public and private spaces. The Lodge is an ode to wine, with a special focus on the Douro wine region, and in this chapter, it serves as a display space for some photos from the Fotografia Beleza Centennial Collection, purchased by Mario Ferreira several years ago.

In the rooms and suites – 67 Superior, 38 Deluxe (all with river view) and seven Deluxe Terrace, two of which are Premium Suites, the equivalent of what is usually called a Presidential Suite – the wine atmosphere is also to blame. Decor, which is complemented by a careful selection of products made in Portugal. As Joanna Pimenta, of the hotel’s sales and marketing department, points out, the sheets, towels, mattresses, faucets, cutlery or crockery are all products of famous Portuguese manufacturers.

The national identity extends to the hotel’s restaurant D. Maria, named after Infante D. Maria who, according to history, is the author of the first Portuguese cookbook. The restaurant space, with its door literally open to the public – there’s even direct entrance for guests who don’t want to pass through the hotel – is also a homage to traditional cuisine, with a menu that highlights regional dishes, such as tripe-style from Porto, veal stewed with rice sausage from Trás -os-Montes, cod with scored purée or Abade de Priscos pudding, all wrapped up with a touch of modernity. A menu that attracts the attention of families, but can also be served in one of the two exclusive rooms that make up the restaurant (20 and 30), ideal for special occasions.

In a context where wine is king, D. Maria Restaurant currently has a selection of 300 references from north to south of the country, including islands, and to satisfy all tastes, some champagne brands. Within this theme, The Lodge Bar completes the show with a unique variety of cocktails, five of which are vintage and created indoors, and wine tastings.