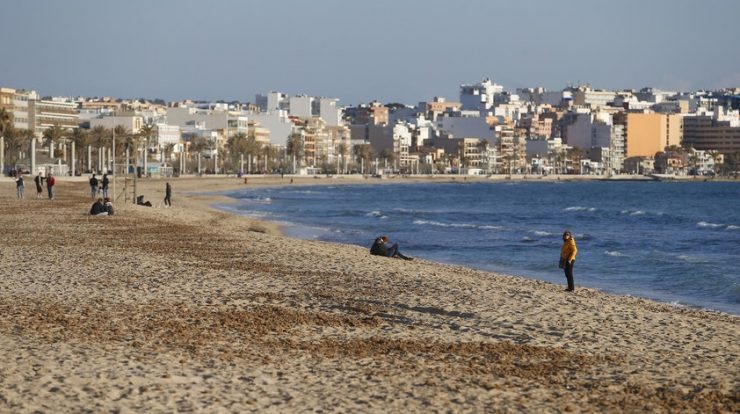 In the interview, Ursula von der Leyen made it clear, given that Americans receive vaccines approved by the European Medicines Agency, and this may allow them to travel and move freely within the community.
Nonessential travel to the United States has been restricted for more than a year.

Von der Leyen has not set a precise date for the beginning of the arrival of tourists from the United States, however Brussels plans to approve the final version of the vaccination certificate in June, To help boost tourism in the warmer months.

To enter this list, countries cannot have more than 25 new cases of Covid-19 per hundred thousand of the population in the last 14 days and have no more than 4% of positive tests among the tests taken in the past week.

Von der Leyen has argued that European Union rules on non-essential travel must change in time for the summer to take into account vaccination coverage.
The United States of America and the European Union both use vaccines from Moderna, Pfizer-Biotech, and Johnson & Johnson.

“Americans, as far as I can see, are using vaccines approved by the European Medicines Agency.”She said. This will allow free movement and travel to the European Union. Because one thing is clear: All 27 Member States will accept, unconditionally, all those vaccinated with EMA-approved vaccines.

However, no expected date has been expressed for this to happen It will depend on the epidemiological situation, noting that the situation is improving in the United States and “we hope it will also improve in the European Union”.

Currently, the United States recommends its citizens to avoid 80% of the world’s countries, due to the epidemic.

The United States still restricts leisure travel in the European Union and the United Kingdom. There have been reports that the lifting of restrictions should be reciprocal, but nothing has been officially announced.

The United Kingdom, already outside the Union Bloc, will introduce a color scheme on May 17 that outlines restrictions on travel abroad. The list of countries that will incorporate each color code has not yet been established.

The United States estimates that 70% of adults are vaccinated by mid-June. In the UK there are actually 65% ​​of the population who are given at least one dose. The European Union indicates a 70% vaccination for July.

Last week, a debate began in Europe about criteria to be taken into account to reopen tourist sites.

There are countries whose economies depend heavily on tourism, including Portugal.

This week there has been a slowdown in some of the restrictions. In Italy, restaurants and bars start serving on the terraces. In France, children are starting to return to daycare centers and elementary schools, and in Belgium, hairdressers and other stores are starting to reopen.

Greece has already said it will open the borders to travelers from the United States, provided they show evidence of vaccination or negative tests for Covid-19.

Spain’s Tourism Minister Fernando Valdes said last week that the country would be ready for mass tourism in the summer. “We urgently need to welcome you this summer. I think we’ll be ready here in Spain. We also think things are going well in the UK vaccination plan. So, we hope to see this summer resume the holiday,” he told Sky News.