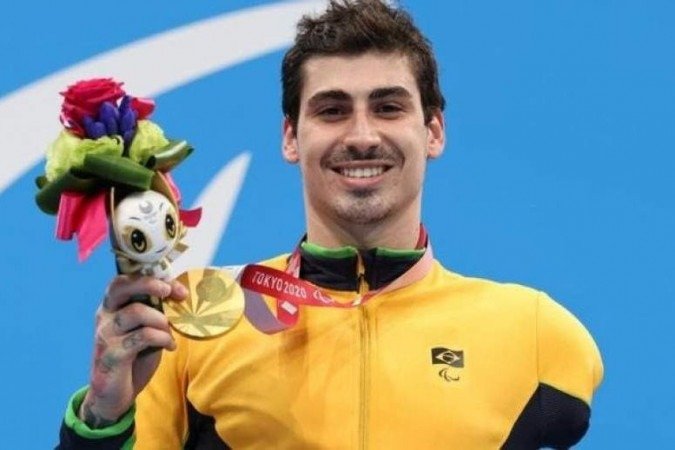 The Tokyo 2020 Paralympic Games have entered their final moments. Nevertheless, representatives of Brazil continue to shine in the championship. The tenth day of competitions won four gold, silver and bronze medals. As a result, the country moved up to sixth place in the overall medal table with 54 podiums (19 gold, 13 silver and 22 bronze).

Marivana Oliveira opened the Brazilian Athletics Achievement Day by competing in the F35 pitch. The Brazilian reached 9.15 meters on the first attempt and took the silver. In the sequence, Mateus Cardoso Evangelista recorded 6.05m in the T37 long jump and won the bronze medal.

Alessandro Rodrigo became the two-time Paralympic champion in the F11 Standard Edition. The athlete’s scores were the highest in the race. Golden came on the last try, when he made 42.27m.

Jerusa Santos, Lorena Spoladore and Thalita Simplício competed in the 200m T11 and won a place in Thursday’s semi-final (2/9). Lilan Mora, with an F33 shot, was close to the podium, but finished the race in fifth. Giuliana Cristina and Tuani Priscilla, with an F57 shot, advanced to the final, but finished sixth and seventh, respectively. Ana Claudia Maria, of the T63 long jump, came in 10th.

In the 100m T12 semi-final, Vivian Soares did not advance to the final because she finished the race in fifth overall. Ryan Silva, from the 400m T13, will also not move to the next stage.

Swimming has also made achievements for Brazil. Talison Glock won his first Paralympic gold medal by becoming the S6 400m freestyle champion. The athlete also won two bronzes in Tokyo. The first in the mixed 4 x 50 meter freestyle relay up to 20 points and the second in the 100 meter freestyle S6.

Gabriel Araujo of Minas Gerais also took the highest place on the podium in the 50m backstroke S2. The swimmer won two medals in the capital of Japan, a gold in the 200m freestyle S2 and a silver in the 100m backstroke S2.

Patricia Santos remained on a peninsula. The swimmer, who was also hoping for a medal that day, outperformed her competitors in the 50m freestyle S4 and finished fourth. Susanna Schnarendorf competed in the same category but did not qualify for the final. Jose Ronaldo da Silva also came close to the podium in the 50m backstroke S1 when he finished fourth in the final.

Ana Carolina Oliveira, in the 100m backstroke S14, finished fifth. Eric Tobira, of the 50m freestyle S4, went to the final, but finished sixth. Runestoni Silva, of the same category, did not qualify for the medal decision. Leila Abate, the 400m freestyle S6, finished the race in seventh place. Vanilton Filho, the S9 100m butterfly, and Bruno Becker, the 50m S3 freestyle, did not make it through the first stage.

Newcomer Nathan Torquato is parataekwondo champion. The Brazilian climbed to the top of the podium in the under-61kg class, the K44 class, after an extraordinary final. The Egyptian opponent was Hamid al-Zayyat.

The Sao Paulo competitor ended up in the medical circuit after a standoff with Daniil Sidorov, of the Russian Paralympic Committee. Zayat returned to the Makuhari Messe Arena, in the capital of Japan, but could not fight. And so the Brazilian got the gold.

In the Golden Dream saga, Torquato defeated Parfit Hakizimana of the Paralympic Refugee Team in the qualifier 27-4, then trampled the Japanese host fighter Mitsuya Tanaka with a score of 58-24 in the quarter-finals. The pass came to the final with a victory over Italian Antonio Busolo 37 x 34.

The team is still alive in their quest for a five-a-side Paralympic Championship. The team beat Morocco with heavy rain and with the help of opponents. The opponent scored an own goal representing the Brazilian presence in the final match, which will be held in the South American derby. Brazil will return to the field on Saturday (4/9) to face Argentina.

The men’s team sent Lithuania, the Paralympic champion in Rio 2016. Parazinho was the morning star. The player scored six of the nine Brazilian goals. The decision regarding gold will be on Friday (3/9). The women’s team lost to the United States on penalties after a tie in normal time. The team is competing for the bronze against Japan on Friday (3/9).

The selection was lost to the Russian Paralympic Committee for turmoil. The yellow and green team won the first set. In the second, the Russians beat the Brazilians and closed the third partial at 25 x 19. The decision was to break the tie, but nevertheless, Brazil could not return in favor and will now fight for the bronze, on Saturday (4/9) with Bosnia and Herzegovina.

The day did not start well for the bocce teams. The BC1/BC2 quartet lost to Portugal by 9×2. Brazil faced Slovakia in the BC4 class and was beaten by 7×3.

However, the BC3 duo opened Brazil’s winning streak by beating Portugal 7-3. In the sequence, the BC1/BC2 team made the second match of the day and beat Slovakia.

The BC4 duo also returned to Arena Ariake, Japan, on Thursday morning. With a score of 4 x 3, they beat Canada.

Fernando Rufino entered the waters of Tokyo Bay in two categories: the 200m KL2 kayak and the Va’a 200m VL2 kayak. In KL2, the Brazilian is second in battery and goes to the semi-finals. In VL2, the athlete did not give way to mistakes, he won the heat and ensured a dispute for the podium.

Brazil has another representative in the 200m VL2. Luis Carlos Silva finished fourth in the tournament and goes to the semi-finals. The athlete also competed in the KL1 200m kayak race. He won the playoffs and went straight to the final.

Cayo Ribeiro also represented Brazil in two categories of speed canoes. In the KL3 200m kayak, he earned a place in the semi-finals. In Va’a 200m VL3, he finished fifth in qualifying and was eliminated.

The participation of the Brazilians on the penultimate day of the bike race was not good. Ana Raquel Montenegro finished 14th in the C4-5 and Carlos Alberto Soares 31st in the C1-3.

American qualifier Fabiola Dergovic faced Emma Rose Ravish of the United States. The recurring arc player beat the American by 6×4. As a result, she advanced to the quarter-finals and competed for a place in the semi-finals with two-time Paralympic champion Zahra Nemati. The Iranian, who is nominated for gold in Tokyo 2020, did not give the Brazilian a condition and won the match 7-1.

In the sport’s debut at the Paralympics, Vitor Tavares faced Deeden Tarisuh of Malaysia. The Brazilian in the SH6 class overtook him and has another commitment for the qualifying stage, on Friday (3/9), against India’s Krishna Nagar.

* Trainee under the supervision of Marcos Paulo Lima