Home Tech A new type of supernova discovered by astronomers 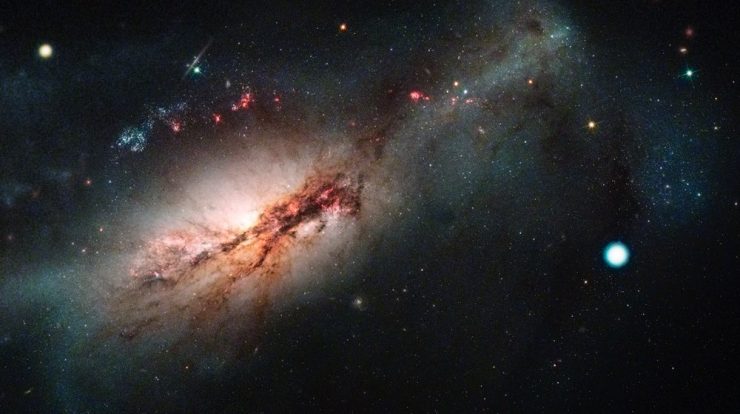 Scientists have discovered a new type of supernova, or starburst, that offers new insight into the intense life cycle of stars. The new research, focused on the 2018zd supernova, confirms a prediction made more than 40 years ago by University of Tokyo astronomer Kenichi Nomoto.

New breakthroughs in discovery began to crystallize in March 2018 in Japan, when amateur astronomer Koichi Itagaki observed the 2018zd supernova, encouraging astronomers to use telescopes to study it about three hours after it happened.

The supernova occurred about 31 million light-years from Earth, and archival images from the Hubble and Spitzer space telescopes allowed scientists to see the star faintly before the explosion. This was the first time astronomers could see a star like this before and after it became a supernova.

The main force that prevents stars from collapsing under their own gravity is the energy in their core.

Usually, supernovae occur in two forms. In the first type of supernova, a core-collapse supernova, the giant star (more than 10 times the mass of the Sun) consumes all of its energy, and its core collapses, resulting in a black hole or dense remnant called a neutron star.

The other type, called a thermonuclear supernova, occurs when a white dwarf (the remnant of a less massive star, usually less than eight times the mass of the Sun) explodes after attracting material from a neighboring star.

But what happens to a star eight to ten times the mass of the Sun, such as the star involved in the 2018zd supernova? The point is, they explode a little differently.

This third type, which has not been previously observed, is known as an electron-capturing supernova, and was originally described by Nomoto in 1980. When a star’s core loses its energy, gravitational forces push electrons out of the nucleus and fuse with the nucleus. This sudden drop in electron pressure causes it to collapse, and the star to bend under its own weight. What remains is a dense neutron star, slightly larger than the mass of the Sun.

The study based on the new research was published Monday (28) in the journal Nature Astronomy.

“One of the key questions in astronomy is to compare how stars evolve and die,” Stefano Valenti, co-author of the study and professor of physics and astronomy at the University of California, Davis, said in a statement. “There are still a lot of connections left, which makes it very interesting.”

What is a supernova that captures an electron?

Daiichi Hiramatsu, a graduate student at the University of California, Santa Barbara and the Las Cumbres Observatory in the US, led a team of researchers that collected data on the 2018zd supernova for two years after it was first observed. The more data they collected, the more they realized that this could be the first example of a supernova capturing an electron.

Nomoto’s theory of these supernovae suggests that they bear an unusual chemical signature after they occur, which the researchers note in the 2018zd data. This phenomenon also satisfied five other criteria of Nomoto’s theory necessary for the proposed type of supernova.

This includes a strong loss of mass before the supernova, a weak explosion, low radioactivity, a core rich in elements such as oxygen, neon, and magnesium, and a massive asymptotic branch star (SAGB). SAGB stars, which are rare, are swollen red giant stars.

We started asking ourselves, ‘What is this strange thing? “Then we looked at all aspects of the 2018zd supernova, and realized that they could all be explained in the electron capture range,” said Hiramatsu.

Because these stars are in a limited mass range, they are not only light enough to prevent their cores from collapsing, but also not heavy enough to form heavier life-extending elements such as iron.

“This is the most well-known case of this class of supernovae, which lies in the mass range between the explosion of a white dwarf and the iron core of a massive star that collapses, then bounces back and causes an explosion, called a supernova collapse. The core,” commented Alex Filippenko, professor of astronomy at the University of California at Berkeley, in a statement. “This study greatly increases our understanding of the final stages of star evolution.”

Filpenko added that the fact that the researchers obtained Hubble images showing the star before and after the explosion helped them confirm the type of supernova that occurred.

Furthermore, this type of supernova is likely responsible for the nebula that lit up the sky nearly a thousand years ago, according to scientists.

The Creation of the Crab Nebula

In the year 1054, a supernova occurred in the Milky Way, which was so bright that it could be seen in the daytime sky around the world for 23 days, and remained visible in the night sky for about two years.

The result of this supernova has been the famous Crab Nebula, a source of fascination over the years for astronomers who believe, with this new study, that it was created by an electron-capturing supernova.

Although the Crab Nebula is considered the best known example of an electron-capturing supernova, if this phenomenon exists, doubts remain, because the event occurred so long ago.

The supernova’s brightness likely increased due to collisions of material discharged from the explosion with material previously emitted by the star – something we also witnessed during supernova 2018zd.

Nomoto celebrated in a statement: “I am very happy to finally discover an electron-capturing supernova, something that my colleagues and I expected 40 years ago to have and is relevant to the Crab Nebula.” “I am very grateful for the great effort involved in obtaining these observations. This represents a wonderful combination of observations and theories.”

“It was a Eureka moment for all of us to be able to contribute towards finishing a 40-year theoretical course and for me personally, because my career in astronomy began when I looked at gorgeous images of the universe in a high school library, among them the iconic Crab Nebula that he captured Hubble Space Telescope,” Hiramatsu added.

Astronomers will continue their search to see if they can find more examples of electron-capturing supernovae.

“The term Rosetta Stone is overused as an analogy when we find a new astrophysical object, but in this case I think it’s appropriate,” wrote Andrew Howell, a scientist at the Las Cumbres Observatory and an assistant professor at the University of California. in Santa Barbara.

“This supernova is literally helping us decipher the millennium records of cultures around the world,” said Hoyle, who was also involved in the study. “Also, it helps us relate something we don’t fully understand, like the Crab Nebula, to something else we have amazing recent records about, like this supernova. And in the process, it’s still teaching us basic physics: like some neutrons stars form, how extreme stars live and die.” and how the elements that make it up are created and distributed throughout the universe.”